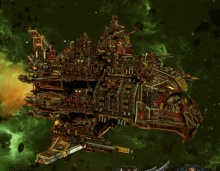 The Hammer Battlekroozer is a type of particularly large and dangerous Ork Kroozer that was first seen during the early days of the Third Armageddon War, when they took a terrible toll on the Imperial fleets.[1]

Like its smaller cousins (the Kill Kroozer and Terror Ship) the Hammer is built on the salvaged hulks of other destroyed cruisers. Hammers, however, are specifically built from the hulks of ships armed with Nova Cannons, the parts of which have been rigged up into a truly ingenious weapon: a launcher capable of being loaded with either torpedoes or bombardment cannon shells.[1] Other commonl weapons are Kannonz.[2] Over time, through salvage and impromptu refits, a handful of Hammers have grown to truly massive sizes comparable to Imperial Battleships. Luckily, these Ork "Battleships" are few in number.[1]

Hammer-class Battlekroozers are a favorite among Ork Warbosses, who often take them as their flagships. This high status ensures that the Hammers get the best weapons and crews in the Ork fleet, making them even more powerful opponents in a battle.[1]