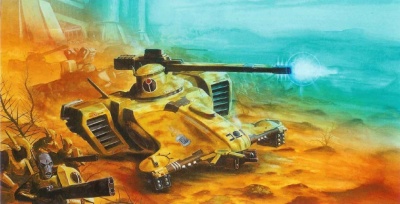 The TX7 Hammerhead Gunship is the main battle tank of the Tau army. It is based on the standard Devilfish chassis but sacrifices transport capacity for high-powered weapon capacitors and extra armour.

This Tau grav-tank was first encountered by Imperial forces during the Damocles Crusade, where it was given its codename 'Hammerhead.'[3b] It has since remained a staple of Tau military forces, and has been used on a number of worlds, including Gravalax, Taros and Pavonis. Since first being sighted, a number of variants has been introduced, most recently during the Taros Campaign.[Needs Citation]

Though it can be fitted with a variety of weapon, the most common (and most feared) is the Railgun, a linear accelerator capable of firing solid projectiles at hypersonic speeds [3b]. A second common weapon is the Ion Cannon, which fires high-energy particles that explosively react at the atomic level.[1][2] Targeting and tracking sensors are located in the Hammerhead's chin-turret, including a Markerlight receiver that allows for superior accuracy against targets painted with a Markerlight beam.[3b]

During the Taros Campaign, a number of Hammerheads were seen sporting new weaponry as their primary armament, including twin-linked long-barreled burst cannons, Missile Pods, twin-linked Fusion Cannons and twin-linked Tau Plasma Cannons. The latter two are thought to still be in the field-testing stages.[3b]

The Hammerhead is protected by a nano-crystalline alloy, the composition of which is as yet unknown.[3b] While lightweight and malleable, the metal is strong and corrosive-resistant, providing good protection while cutting down on weight. The Hammerhead's armour can be penetrated by Imperial anti-tank weaponry, such as battle cannons, lascannons and krak missiles.[4]

The Hammerhead's pilot and co-pilot sit in the vehicle's climate-controlled cockpit, the latter charged with controlling the Hammerhead's navigation, communications, and secondary weapon systems. The vehicle commander sits in the top turret and controls the primary weapon, assisted by a Targeting Array for improved accuracy. Automated overrides allows any crewmember to take another's role should they become incapacitated.[3b]

The Hammerhead uses a complex dual anti-grav/jet propulsion motive system. Utilizing the Tau's command of techno-sorcery, the Hammerhead generates an anti-grav "cushion" on which it floats, allowing it to skim over a planet's surface and avoid hazardous obstacles. Two powerful jet engines, located on either side of the vehicle, are able to pivot to either propel the Hammerhead forward or give it additional lift. These jet engines, while equally noisy, are more reliable and efficient than Imperial models.[3b]

In addition to their standard weapons and systems, the Hammerhead is also equipped with retractable landing skids. Already equipped with a Targeting Array, it can also be further modified with additional upgrades.[Needs Citation]