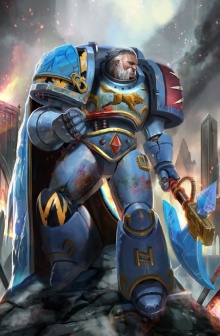 The Badge of the Great Devourer[1x].

Harald Deathwolf is a Wolf Lord of the Space Wolves, commanding the Deathwolves Great Company[1a][6].

He is often found riding into battle on his Thunderwolf Icetooth with many lupine beasts in tow, whether they be made of flesh, metal or a mixture of both[1a]. Usually found close behind will be his savage champion, Canis Wolfborn, a giant of a man riding his equally giant Thunderwolf, Fangir[1b]. In 913.M41, he was charged with eliminating the notorious Space Wolves traitor and Chaos Lord Svane Vulfbad.[2] His chosen symbol is the Ravening Jaw, symbolized by a wolf eating a star. The Ravening Jaw in Fenrisian mythology symbolizes the Wolftime, when Morkai will eat the sun and the stars and shroud Fenris in an eternal night.[1a]

Harald Deathwolf is known for his mutual animosity with Thousand Sons Sorcerer Mordant Hex, and the two have frequently come to blows.[3]

Before his induction into the Space Wolves, Harald Deathwolf was a champion of the Tide Hounds tribe on Fenris.[5]

Harald Deathwolf has held the rank of Wolf Lord for over a century. A renowned warrior of Leif Snowfang’s Great Company, Harald had risen quickly to his lord’s Wolf Guard, and won many victories in Leif’s name. Ever since Harald was a Blood Claw he always had an affinity for lupine creatures, and his packmates often joked that he was the misbegotten son of a Thunderwolf, earning him the nickname Thunderson. Leif used Harald’s kinship with wolves often in battle, and the Thunderson would lead packs of Fenrisian Wolves, Thunderwolves and other feral creatures with a skill beyond anyone in living memory. When Leif Snowfang fell broken upon the battlefields of Rygar, slain by a lucky blow from the Ork Warboss Rokbad Necksnapper, it was Harald who rallied the warriors of his Great Company and led them to victory. On a field piled high with the corpses of Rokbad’s tribe, Harald was voted Wolf Lord amid the cheers and howls of his kin. As the tale goes, at that moment Harald looked up to the dim Rygar sun, shrouded by battle smoke, and proclaimed himself Deathwolf, and his totem the Ravening Jaw, the symbol of the Wolftime.[Needs Citation]

Harald Deathwolf’s Great Company swelled with packs of wolves, and many of his chambers in the Fang are given over to dens and lairs. Wherever the Wolf Lord goes, loping packs of wolves will follow, always skulking in his shadow or lying at his feet. One frozen Fenrisian night, the Deathwolves gained a powerful new warrior. On this night, Canis Wolfborn came to the Fang with his wolf pack, following the snow-covered tracks of the Space Wolves initiate Jorek the Giant, who had come to hunt Canis’ kin and failed. Raised by wolves and completely feral, Canis howled out to the cold stone edifice, a haunting challenge to those that would try to kill his wolf-family. It was Harald Deathwolf who answered this call and met with the young warrior by the light of a cold moon. Unable to communicate with Canis, Harald stared into his eyes and growled a challenge, before both warriors hurled themselves at the other with bared teeth. Even though Canis was but a man, Harald was impressed with the strength and skill with which he fought. When Canis finally bared his neck in submission to Harald, the Wolf Lord led him into the Fang. In time, Canis would become Harald’s champion and the greatest of his warriors.[2]

After hearing that his Tide Hounds tribe was again beset by Ice Troll migrations, Harald Deathwolf returned to his ancestral lands without permission and purged the marauding monsters, claiming the enchanted pelt of the largest of their number as a trophy.[5]

The personal Strike Cruiser of Harald is called Alpha Fang — the no less swift and predatory than his master.[4c]