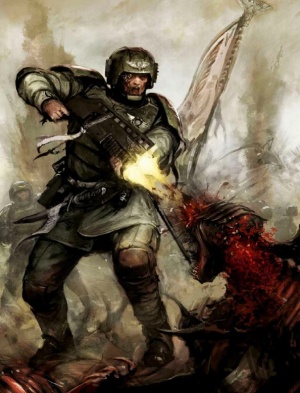 A Hardened Veteran slays a Tyranid with his Shotgun.

Hardened Veterans, also known simply as Veterans, are troopers of the Astra Militarum who have survived multiple battles and have become skilled and efficient warriors for the Emperor of Mankind. Veterans are sometimes assembled into what is known as a Veteran Squad to be placed within less experienced platoons or companies. Imperial Guard regiments are often called upon to fight gruelling wars of attrition lasting standard years or even solar decades. As time passes, each company will shrink in size as casualties take their inevitable toll. Those that survive are the hardiest troopers in the Astra Militarum. Their battlefield training has been honed in the fires of war, forging them into warriors who have learnt how to fight and kill with lethal efficiency. Veterans are the battle-hardened elites of the Astra Militarum, the first squad in an assault and the last in a retreat.[1][2]

Hardened Veterans are natural born survivors. They have escaped ambushes, negotiated mine fields, fought a myriad of foes and lived to tell the tale. Their continued existence, despite the dangers they face, is testament to both their skill at war and their natural survival instinct. In extremely rare cases an entire company may endure the grim wars of a campaign and emerge largely unscathed, their practiced skill, peerless cunning and supernatural luck allowing them to avoid heavy casualties. Legendary reputations follow such companies of Veterans, and each new engagement brings them greater renown amongst the rank-and-file troopers. But in the vast majority of cases, only a single squad of combat-hardened Veterans will survive the slaughter of their company. Such squads are attached to larger regiments where it is hoped they will assimilate quickly and their skills may rub off onto less-experienced shoulders. These Veterans may not be from the same regiment or even the same homeworld, and so may introduce brand new combat-tactics and an entirely different war-ethic to their foster regiment.[1][2]

Although Veteran Squads technically remain part of the same rigid command structure, these grizzled survivors function best when allowed a certain amount of free rein. They provide valuable battlefield experience and may employ unconventional but effective tactics that are not taught by the Tactica Imperium. Veterans excel in all aspects of warfare, from close-range firefights to heavy demolitions work. Veterans are all inevitably deadeye shots and such warriors are usually kept together to bolster the line, their superior marksmanship making the difference between defeat and victory.[1]

Many Veterans carry weapons and wargear not commonly issued to the massed ranks of the Imperial Guardsmen. An extra plasma blast here or a gout from a Heavy Flamer there can make the difference between life and death. Veteran Squads acquire these non-standard armaments from a variety of sources. Some are "borrowed" from Departmento Munitorum stores, whilst others are battlefield trophies prized out of the cold, dead hands of a fallen enemy. Some squads have in their number a Veteran Heavy Weapons Team. These are the last survivors of standard Heavy Weapons Squads, who have ample experience in operating their devastating weaponry.[1]

The hardy Catachan Jungle Fighters are an exception from other regiments as they do not contain Hardened Veterans as elite troops, and even their standard soldiers are considered to be Veterans in their own right, having grown up and survived on the galaxy's deadliest planet.[3]

Within the forces of the Penal Legions, such as the Savlar Chem Dogs, Hardened Veterans are instead known as Hardened Criminals.[4]