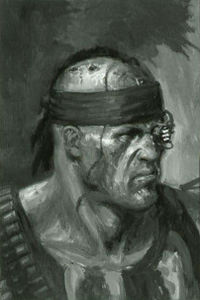 Gunnery Sergeant "Stonetooth" Harker, also known as the "Stonetooth Devil", is a squad leader of the Catachan 2nd Jungle Fighters Regiment, filled with the elite units known as "Catachan Devil Squads" and leading his own unit of these fearsome warriors nicknamed "Harker's Hellraisers". Feared and famed for his strength and endurance, he is so exceptionally resilient that all who have served with him believe that the creature who can kill him simply has not yet come into being.[4]

All Catachans have a reputation for being tough, but Harker is perhaps the hardest of them all. While a rumour claiming he chews glass instead of tobacco might be false, he has certainly been known to place his hands into the fire and ignore it, and easily shrug off blade cuts or gunshot wounds without as much as a grimace. For Harker, pain and bleeding are concerns for weaker soldiers.[1]

Sergeant Harker is a giant of a man, his large frame covered with slabs of muscle and sinew. His strength is such that he carries his Heavy Bolter, "Payback," as easily as a normal man might carry a rifle, without even breaking a sweat.[1][2][3]

Harker is uncomplaining in the completion of his duties. A tough and grizzled sergeant with guts for brains, he shows an enthusiasm for war that is somwhere between arrogance and bravado. It would be innacurate to say he possesses no tactical acumen, for when it comes to war "Stonetooth" is an expert. But when given the choice between fighting and thinking his way out of a tight spot, Harker reaches for Payback every time.[4]

Harker has survived the most gruelling of campaigns and has yet to find an enemy that won't die to the bark of his heavy bolter or the sharpened edge of his combat blade. There is not a single aspect of war that Harker has not mastered, from rescue missions to assassination, from reconnaissance to demolitions. His squad members are elite Catachan Devil Guardsmen, exceptional even among their fellow Catachans, composed of the regiment's bravest veterans and named after the voracious predator whose ferocity they emulate in combat. Their particular mission is usually to conduct long-range penetration raids deep behind enemy lines, responsible for bearing the brunt of the enemy's response when battle is finally joined. In battle he will advance blithely towards the enemy, firing all the while, before entering melee.[1][2][3][5]

One famous example of Harker's bravery was during a battle against Tyranids on the twilight world of Jorn V, where his squad was assaulted by a pack of Raveners bursting from beneath the black ground. Within seconds, his ammunition loader was torn apart by monstrous claws while the rest of his squad were trying their best to stay alive. Without missing a beat, Harker leapt onto the back of the closest beast and crushed its neck between his monstrous biceps, despite the beast's frenzied efforts to buck him off. Harker then smoothly grabbed up Payback and shot down the rest of the pack, alien bodies bursting apart in a shower of ichor. Seeing that all his comrades were dead, he stalked off to find the rest of the company, Payback tracking back and forth like a hound searching for prey.[1][3][4]

Exaggerated stories of human heroics circulate constantly amongst the soldiers of the Astra Militarum. While dug into fox-holes waiting to face inevitable horrors, these braggadocios tales help to keep the fear at bay. Though few such stories can be substantiated, those told about Gunnery Sergeant Harker are generally believed. One of the most famous is of how the gargantuan trooper came to possess the heavy bolter he now carries into battle, and how it earned its name.[4]

When he was a new recruit -so the story goes- Harker's platoon was sent to eradicate a roving greenskin warband in the tangle-barrens of Orriah Ossetti. Only a handful of Orks had been spotted on the death world, so reconnaissance and aerial support were deemed an unnecessary expenditure. What Harker's platoon encountered was not a rag-tag band of savages, but a hardened cadre of Blood Axe warriors. The ambush launched by the Orks was as brutal as it was unexpected, and soon Harker was the only Guardsman remaining. His lasgun's energy cells were fried from overuse, so he reached into the searing flames where a Heavy Weapons Team had been immolated and retrieved his fallen comrades' heavy bolter. The towering Catachan then trained the massive gun on the remaining greenskins and unleashed vengeful retribution. Since that day, Payback has been massacring Harker's enemies throughout the galaxy.[4] 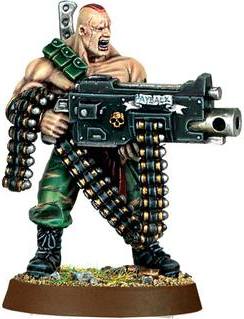