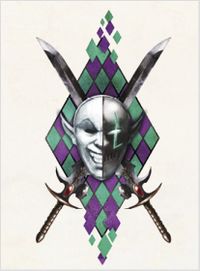 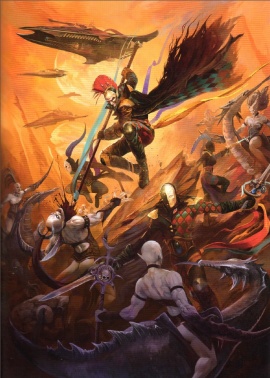 Harlequins carry out several self-appointed duties since their first reappearance after the Fall of the Eldar, the most central of which is putting on theatrical performances of Eldar History. Their belief system is intertwined with the Fall, as Cegorach is one of the few Eldar deities reckoned to have survived it in some way. The Harlequins believe that his intrinsic light-hearted personality ensured he kept his distance from the depravity and corruption that became Slaanesh and that he survives to this day, often taking the form of a Harlequin himself - with those that meet him in this guise only becoming aware of his presence after he has left.[1a]

As the 41st Millennium comes to a close, more and more Eldar vanish into the Webway, forsaking their past lives and taking up a Harlequin mask.[11b]

The Harlequins fight alongside us, that much is certain. But do they fight with us? For us? That, I have less faith in. Whatever they once were is gone, subsumed by their masks, their saedath, their Laughing God and his enigmatic agenda.

So must I wonder; are we aught more than tools to them? Or do the servants of Cegorach use us and our Drukhari and Exodite cousins just as we manipulate and direct the younger races of this troubled galaxy? If so, to what ends? Their strength is welcome, but their intentions trouble me deeply.[14f] 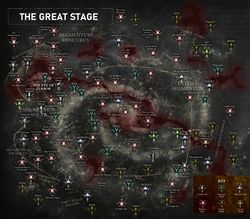 Harlequins are able to move across the galaxy by traversing the Webway, the quasi-dimensional creation of the race known as the Old Ones. It is said that Cegorach is the only being in existence who knows every single path through the webway. This might explain how his disciples possess such an intimate knowledge of its twists and turns, for the Harlequins walk the webway without fear, appearing and disappearing at will. So well versed are they in the webway’s secret routes that many other Aeldari have credited the servants of the Laughing God with supernatural powers. The Harlequins utilize their knowledge of the webway’s hidden paths to outmaneuver their foes and strike from unexpected quarters. In this way, entire masques of Harlequins can position themselves in ambush, guaranteeing the element of surprise.[14e]

The Harlequins are rumored to be among the few who know the location of the legendary Black Library and help protect it against unwanted intruders.[3] 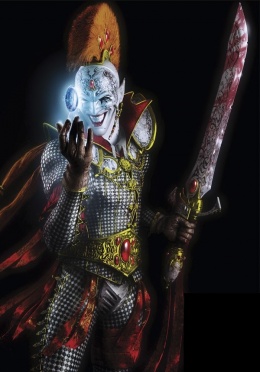 Harlequins have no formal leaders, being a collective of like-minded players each of them profoundly aware of its role.[14b] 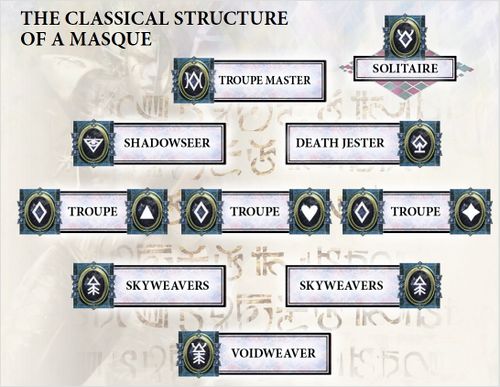 They perform around the galaxy as masques. A masque is both an army and a company of Troupers that are accompanied by specialist performers.[1a]

A Troupe is a number of ordinary Harlequins referred to as Troupers who have chosen a Light, Twilight, or Dark role, and are led by a Troupe Master.

Harlequin masques function with brutal efficiency, able to operate with extreme cohesion and coordination despite lacking a formal military chain of command and having little direction upon the battlefield.[14b]

Each of the Masque's mythic plays has a battlefield counterpart, known as the Saedath or Masque Form. Essentially a strategic battle plan with an allegorical aspect, these inform target priority, overall strategy, and by which troupe division the conflict will be led. The appropriate Saedath is chosen based upon mythic cycles, ritual significance, or even the time of day.[14b]

Some Saedath's are closely associated with a Masque :[14f]

Other famous Saedath can be performed by any Masque :[14b]