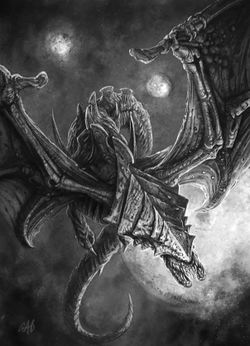 The Harridan is one of the largest flying Tyranid creatures the Imperium has yet encountered.[1]

It has two bio-cannons and a pair of Scything Talons for swooping low and slashing up tanks. Being a living creature and relying on wings rather than jet engines the Harridan cannot match an aircraft for straight-line speed but its lithe, twisting body is far more manoeuvrable allowing it to twist and turn to avoid enemy fire. Harridans seem to act as brood-mothers to smaller Gargoyles. It is thought that Gargoyles lack the endurance for very long distance movement but it is known that they can hitch a lift on a Harridan using their hooks and claws to attach themselves. The Harridan has no legs or feet and because of this it has been theorized that once airborne a Harridan can never land, though some Xeno-Biologists believe that Harridan can land and slithering on its belly like a snake. It is only a theory at this moment.[2]