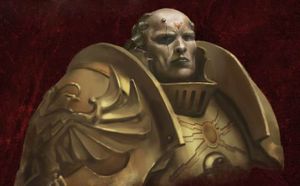 Hasturias Calaxor is a Venerable Contemptor Dreadnought within the Adeptus Custodes and has served for many millennia.

He first came to prominence during the Horus Heresy, when he defended the Imperial Palace from the Warmaster's forces. During that massive battle, Calaxor single-handily held the Enlightener's Star against the Traitor Guard of the 9th Terran Wardens. He later rallied the Gospodor Heavy Infantry with his bravery and led them to retake the Dome of the Architects from Dortha Kol's Sons of Horus Legionaries. While fighting beside other Custodes, Calaxor finally drove Kol's Legionaries to destruction and felled the traitor Warhound Titan Warp Jackal, in the process as well. All these heroic accomplishments earned Calaxor the rank of Shield Captain, even while the battle against the traitors raged on. After attaining his rank, Calaxor led three further highly successful counter-offensives before the siege’s end. Renowned for the controlled aggression of his tactics, Calaxor earned himself many more names in the centuries that followed.[1]

These included the defeat of the Daemon Thogralathrax on Thade, which prevented the Suppurant Scourge from being loosed on Terra. The battle for the Star Keep Magnificence, where he personally killed the heretical Singer of Miseries, before leading a band of Vertus Praetors to end the traitor threat on the Star Fort. It was Calaxor, also, whose blade ended the threat of the rogue Imperial Assassin Shae, before she could come within a hundred miles of the Golden Throne. When the Shield-Captain finally fell in battle on the Dead World Palathrix, his sheer force of will kept him alive long enough to be interred within a Contemptor Dreadnought and allowed him to continue to serve the Emperor. Now a Venerable Ancient, he has assumed a new role within the Ten Thousand and serves the Custodes, as both a living war engine and a strategic advisor for their forces.[1]