The Hawk Lords are a Codex Chapter of Space Marines.

The Hawk Lords eschew Drop Pods in favour of Thunderhawk Gunships for low-altitude insertion. They are the undisputed masters of such tactics and it is not unknown for Thunderhawk pilots of other chapters to hone their skills on temporary service as part of a Hawk Lords Talon Wing.[1a] The Hawk Lords also often use their Stormtalon Gunships as attack units, fielding entire squadrons of these manoeuvrable and fast aircraft to strike enemy positions deep behind the main front lines.[7]

The Hawk Lords are also responsible for the creation of Hawk Wings, masterfully-crafted jump packs capable of bearing even a Devastator Marine into battle without costing him the use of his heavier armament.[11] 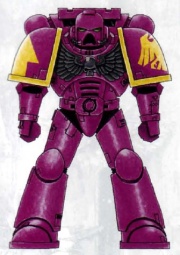