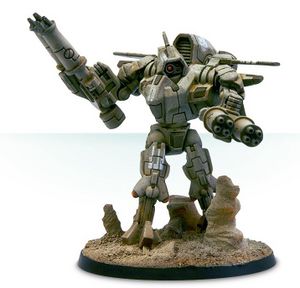 The XV9 'Hazard' Close Support Armour is a newly-introduced Battlesuit used by the Tau Empire. Though highly sophisticated and powerful, the XV9's introduction has caused controversy.[1]

At its core, the XV9 is a short-range close combat weapons platform, its reinforced chassis being much larger than any other Battlesuit design and using experimental technology to pack enormously-powerful weapons powered by a compact energy core.[1] This loadout, besides going against typical Tau military doctrines, also requires a substantial expenditure of resources to produce. Traditionalist elements of the Ethereal and Earth Caste have argued that that these costs would be better used building more tried and true weapons, however those Fire Caste members who use it, especially members of the Ke'lshan Sept, swear by its ability to fulfill the counter-attack role.[1]

Because of the sophisticated nature of the XV9's controls, only Shas'vre with years of experience piloting Crisis Battlesuits are assigned to pilot the 'Hazard' armour.[1] They will typically operate in teams of one to three, including a team leader.Three of these teams will often operate as part of a Swift Protector Wing to perform dangerous battlefield duties.[1]

The standard XV9 armour is armed with two Twin-linked burst cannons and has inbuilt photon casters to launch defensive Photon Grenades. In addition to their jetpack, the armour also has Vectored Retro-Thrusters for increased maneuverability. Support systems include a Multi-tracker and either a Blacksun Filter, Drone Controller, Target Lock or Shield Generator.[1] One or both of the Burst Cannons can be replaced with a Pulse Submunitions Rifle.[1]