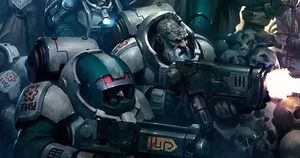 The Hearthkyn Warriors are the common soldiers of the Squat Leagues of Votann and are armed with high-tech weaponry.[1]

These clone warriors form the core of the Kinhosts, and unlike Space Marines, they are not bred solely for war. These soldiers are a citizen militia drawn from the populace of the Holds and disregard gender, occupation, or social role. While warriors, they also live fulfilling lives outside of war. However while they often have side trades outside of war, Hearthkyn are nonetheless well-trained and equipped for war and drill themselves as much as the elite warriors of many other races. They boast excellent discipline and prodigious martial skill, for a Hearthkyn can not join a band until they are able to pass a rigorous series of tests.[2] Moreover, Hearthkyn Warriors are often engineered with particular cloneskeins that allow them to specialize in combat such heightened senses, improved stamina, and night vision. Others augment their bodies for battle with mechanical limbs and synthetic organs.[1] Despite being technically classified as militia, no Hearthkyn is treated as expendable, and field medics are common amongst their ranks. Strong bonds of loyalty bind the individual Hearthkyn together and ensure comradeship of one squad to the next.[2]

Hearthkyn are led into battle by Theyns, in squads of up to 20 soldiers and can stand against the best the Galaxy has to offer. This is due to a combination of their rigorous martial tradition, which gives them the ability to stay in close combat, and assistance from the Votann, which provides the Hearthkyn with solid void-hardened Void Armour. They are armed with a variety of weapons, such as Bolt Revolvers, Etacarn Plasma Pistols, Ion Blasters, Etacarn Plasma Guns, Autarch-pattern Bolters, HYLas Auto-Rifles, Concussion Grenades, and Plasma Axes.[1] Those warriors that show sufficient apitude are given additional training to wield specialist weapons, such as L7 Missile Launchers, EtaCarn Plasma Beamers, and Magna-Rail Rifles.[2] 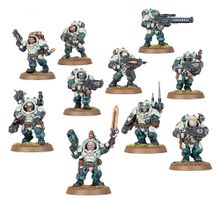