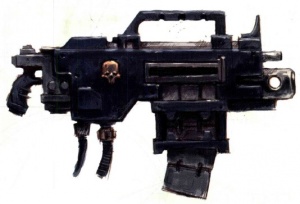 The Heavy Bolter (also known as Back Breaker[15]) is an enormous version of the Boltgun. Of much larger size and weight, the heavy bolter fires powerful armor-piercing fist-sized bolts at the enemy with a staggering rate of fire.[7][6]

The heavy bolter is generally used for anti-infantry or fire support roles, also known as the "Back Breaker" or the "Bruiser" by the crew who have to carry it because of its great weight - but also because of the heavy punishment it can deal out to the enemy.[1] It fires a round considerably larger than that of the standard bolter shell, with more propellant and longer range and higher stopping power, making it capable of destroying light vehicles.[5][8] Because of its high rate of fire, jamming is often a problem.[5] Like all bolt weapons, heavy bolters require regular maintenance and ancient litanies to appease their spirits.[5] It is seldom seen outside military organizations.[8]

The most modern version of the heavy bolter in wide spread use is the Astartes Mk Ivc. The weapon goes through rounds very quickly using either a disintegrating belt or 40-round high capacity box magazine.[4]

The Accatran pattern MkVd heavy bolter is used by the 99th Elysian Drop Troops Regiment. It features an integral bipod for sustained firing and a sight inside of the carrying handle. The ammunition used by this weapon is anti-vehicle: self-propelled, mass-reactive, high-explosive, and armour-piercing.[9] 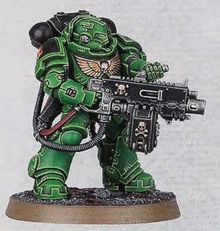 This shoulder-braced pattern is in use with the Adepta Sororitas.

The Infernus Heavy Bolter is a pattern of heavy bolter used by the Deathwatch. These weapons are mag-clamped with rare suspensor discs that reduce the weapon's weight considerably. It is also equipped with a Heavy Flamer.[16]

The Maxima MkIV heavy bolter is used by the Space Marines, including the Mantis Warriors' Tactical Squads.[10] 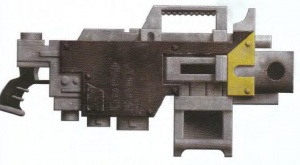 The MK IV Requiem Pattern Heavy Bolter generally sees more use in the hands of the Dark Angel chapter, their dedication to scripture and lore far surpassing most other chapters. The special incense burned in the censor has gained the nickname “Uzziel’s breath”, and is said to be calming and to sharpen focus. [14] 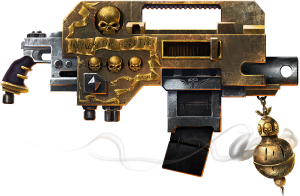 Issued to Legiones Astartes during the Great Crusade and Horus Heresy.[12b] 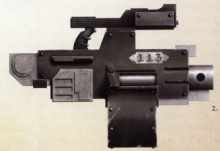 The Assault Bolter is a miniaturized version of the Heavy Bolter used by Primaris Space Marines.

Due to the fact that in most cases specific heavy bolter images are not labelled, unnamed designs are collected here, grouped by outward similarity.