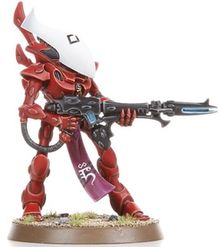 D-Scythes or Distortion Scythes are advanced Eldar Vortex Weapons. Considered a sinister and taboo weapon, D-Scythes can rip the soul of an enemy from their body and banish it to the Warp. When fired, a D-Scythe emits no visible blast and leaves behind no damage, save the motionless corpse of those targeted. D-Scythes are normally wielded by Wraithguards in place of their Wraithcannons.[2]

The Eldar call the act of separating the spirit from its body 'Cutting of the Crone's Cord', for in Eldar lore a strand ties the soul of a being to its material form. Tradition has it that only the Crone Goddess Morai-Heg herself has the right to sever this connection, for a mortal doing so is merely playing god. However as the desperate situation for the Eldar continues, more militant Autarchs are calling for more frequent deployment of these taboo weapons.[2]

The D-Scythes are so fiendish that no mortal (only Wraithguard) could wield them.[3]

Heavy D-Scythes are a heavier version of the D-Scythe commonly mounted under the wings of Hemlock Wraithfighters. Originally designed to sever the link between Tyranids and the Hive Mind, these powerful weapons can even scramble the engrams of soulless beings such as Necrons.[2]