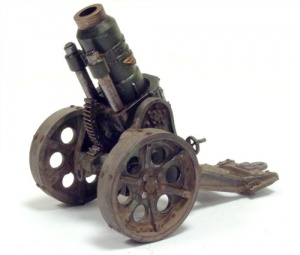 The Heavy Mortar is a larger support version of the standard Mortar used by the Imperial Guard.[1] Its primary advantages are a wide range of ammunition types, a high rate of fire, and simplicity to construct and maintain.[1]. However its massive size means the heavy mortar must either be towed into place by a Trojan or Centaur or mounted on a vehicle, most notably the Griffon Mortar Carrier.[2][3]

While they were once quite popular with many Imperial Guard regiments, the use of heavy mortars has fallen out of favor in recent years, since for many commanders it lacks both the heavy firepower and long reach of much larger artillery pieces,[2] limiting its use in box-barrages or counter-battery fire.[3] Towed heavy mortars have become even less popular, being seen as too slow to keep up with advancing mechanized units, and have largely been regulated to PDFs and Siege Regiments.[3]

For all their faults heavy mortars also have a number of advantages. They are an excellent close support weapons for engaging enemy infantry and light vehicles, freeing the heavier artillery for use against more appropriate targets, and can maintain a steady rate of fire for hours. Its versatility also allows it to fulfill a variety of other roles, from launching illumination shells during night battles or laying down a smoke screen before an infantry attack.[3]

The variety of ammunition the heavy mortar can fire is part of what keeps it active on the modern battlefield. Below are a listing of some of the more well-known shells these weapons can launch.