The Venom Cannon is a Tyranid Bio-weapon used by heavier Tyranid organisms.

The Venom Cannon fires salvos of crystals formed of highly corrosive poison[2] and then coated in a metallic, venomous reside. They are launched with an electrostatic charge at tremendous velocities. A target, if not killed outright by the impact, will be shredded by the hailing shards of shattered crystal, or by the corrosive poison from the shattered crystals. They are also effective against vehicle armour, shattering within the bulkheads of a tank and killing the crew.[1][3]

The Heavy Venom Cannon is a larger and deadlier version of the venom cannon that launches a greater crystal payload at supersonic speeds. The shot collides with enough force to cave in enemy tanks, and also releases a residue of the electrostatic firing charge upon collison in a lethal blast of electrical energy.[1] 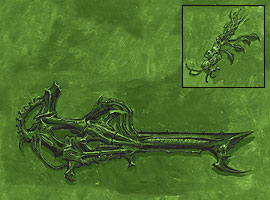