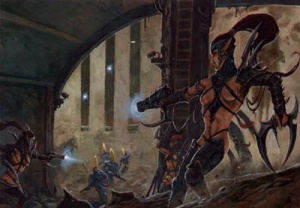 Wyches, also known as Hekatarii[3] are gladiatorial warriors of the Dark Eldar, they each belong to one of the various Wych Cults of Commoragh. Wyches fight in arenas in duels with one another and with various captured aliens and beasts; few survive their first duel but those who live learn quickly. Ruled over by their Succubi, the Wyches are highly proficient at close-quarters combat, practising their skills for their entire lives. Wyches often use a cocktail of combat-enhancing drugs to improve their performance on the battlefield. A Wych squad-leader is known as a Hekatrix.[2]

Because of Dark Eldar's unending need to bathe in murderous sensations, the Dark Eldar have evolved the Hekatarii, known in common parlance as the Wych Cults. Each Wych Cult is a thousands-strong organisation of gladiators that put on nightly displays of the most incredible violence; not only for the edification of the masses, but also for their literal sustenance. Such is the scale of the carnage staged by these armies of warrior-athletes that their audiences leave the arena with the glow of well-fed predators. In this way the populace is kept from full-scale anarchy – at least, those portions of Commorragh wealthy enough to attend the Wych Cults’ nightly performances.[3]

Each Wych Cult has its own arena, which is as much a display of their wealth and status as it is a stage for their spectacles of violence. Comparing architectural masterpieces such as The Crucibael or Moedh Stair to the primitive amphitheaters of other civilisations would be much like comparing a glittering palace to a mud hut. Likewise, the Dark Eldar athletes that perform within them make the most gifted human acrobat look like an uncoordinated ape by comparison. Each arena has its own deadly charms and challenges, from staples such as spinning blades and enraged predatory beasts, to gravity-wells, kinetic inversion snares or even more esoteric and inventive hazards.[3]

Most of the Hekatarii are female, for they are more often able to attain the pinnacle of poise and grace their craft demands. Male Wyches ensure that their Wych Cult is never wanting for strong offspring, yet though they are valued they rarely attain high rank. Certainly the Succubi who rule over the Wych Cults are universally female.[3]

Almost every Wych Cult enjoys the patronage of a powerful Archon, for there is much glory to be had for the founders of the feast. More than this, however, the Wych Cults are powerful allies. After all, each is comprised solely of trained killers who enjoy nothing more than to prove their consummate skills in battle. This mutually agreeable arrangement ensures that the Wych Cults never run short of slaves and exotic combat stimulants. A good patron is always generous lest his stable of warrior athletes decides to bite the hand that feeds them. Meanwhile, the Archon gains the allegiance of a sisterhood of exceptionally trained Hekatarii to lend their blades to his raids upon realspace.[3] 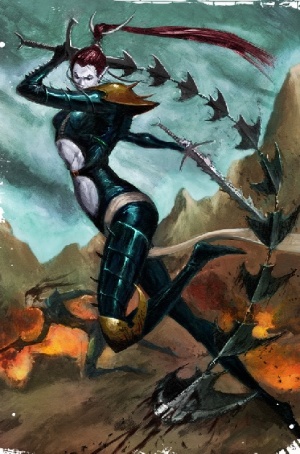 Wyches possess great variety of different kind of close combat weapons. These are, for example, Hekatarii Blades[4], Punch Daggers, weighted flails, Vambrace Blades, knives, swords etcetera. Each Wych owns an elegant dagger made individually for her only by artisans of Commorragh. These knives are kept in a sheath with an inbuilt sharpening field to ensure it stays eternally keen. Wyches generally also carry splinter pistols, Blast Pistols[4], Phantasm Grenade Launchers[4], and plasma grenades.[1a] In battle they can also be armed with haywire grenades and be carried into combat on a Venom or Raider.

Each wych squad is led by hekatrix. These elite wyches form in time to time a clique of murderesses known as Bloodbrides. These Bloodbrides are under command of Syren who answers only to high command of Wych cult. Bloodbrides are known to have fierce rivalries between each other but in time of raids they unite their bloodthirsty powers on battlefield. As Bloodbrides are the elite among wyches they are granted a greater number of special weapons than "normal" wyches.