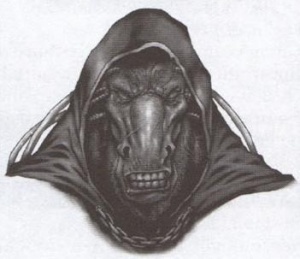 Inquisitor Heldane at the time of the Sabbat Worlds Crusade.[4]

Golesh Constantine Pheppos Heldane[2d] was an Inquisitor of the Ordo Malleus. He was a powerful psyker and a pupil of Inquisitor Commodus Voke in 240.M41. In his youth, Heldane was a staunch Puritan like his master Voke, but became a Radical in his later years. 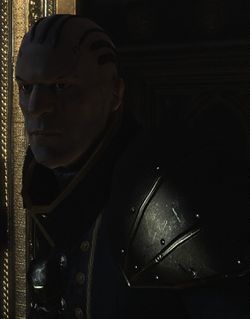 Inquisitor Gregor Eisenhorn first encountered Heldane in 240.M41, while undercover during the investigation of House Glaw on Gudrun. Heldane's master, Commodus Voke, reluctantly agreed to allow Eisenhorn to pursue his more subtle approach, but insisted on Heldane accompanying Eisenhorn's retinue.[2a] This nearly ended in disaster when Eisenhorn and his retinue were exposed, tortured, and put into the Glaws' arena to be slaughtered by Carnodons. Heldane was savagely mauled, but nonetheless managed to kill one of the Carnodons with a poleaxe, and survived.[2b] Several months later, Eisenhorn encountered Heldane at Voke's side, aboard the Inquisitorial ship Saint Scythus, grimly noting the livid scars covering his entire head.[2c]

When Eisenhorn and Voke conducted an auto-seance, psychically interrogating House Glaw's ally Girolamo Malahite, Voke was badly wounded when they made their escape from Malahite's collapsing mind, which summoned a daemon from the warp as a final act of spite. Voke asked Eisenhorn to take Heldane under his wing if Voke died, and sponsor his eventual elevation to full Inquisitor. However, Voke survived and later elevated Heldane to the rank of Inquisitor himself.[2d] His elevation came approximately 40 years later, in or around 278.M41.[3a]

As an Inquisitor, Heldane took part in the Helican Crusade, cooperating with fellow Inquisitor Lyko and his old mentor Voke, to capture thirty-three alpha plus psykers in the service of the Archenemy.[3a] As such, he was on Thracian Primaris in 338.M41, as part of the great triumph in which the psykers were paraded as prisoners, a day which turned to disaster with the Atrocity orchestrated by Inquisitor Quixos. He joined the impromptu Inquisitorial task force created to round up the escaped psykers. Eisenhorn noted that he still bore the wounds he had received from the Carnodon on Gudrun, and far from hiding them, he had undergone surgery to exaggerate their effects, giving his face an elongated, equine appearance. His psyker abilities had come to exceed Voke's, but Eisenhorn still found him poor company.[3b]

More than a year later, after Eisenhorn had been declared Excommunicate Diabolus, and assembled a secret gathering of four Inquisitors, including Voke, to track down and destroy Quixos, Godwyn Fischig noted with relief that Heldane was not at Voke's side, as he and Eisenhorn both knew that Heldane would have been delighted to hand Eisenhorn over to the Ordo Malleus, if he knew his whereabouts.[3c]

In 386.M41, Inquisitor Heldane - along with Lord Inquisitor Leonid Osma, the Grand Master of the Ordos Helican - declared Eisenhorn an outcast when certain facets of his life came into public knowledge (as public as you could get with the Inquisition, anyway) after the escape of Pontius Glaw from his captivity on Cinchare.[Needs Citation]

Heldane continued on in his service to the Inquisition for nearly four centuries afterwards, and was a part of the Sabbat Worlds Crusade during the campaign on Menazoid Epsilon in 765.M41.

Heldane backed Lord General Militant Hechtor Dravere — a possible successor to the late Warmaster Slaydo, who was killed at Balhaut eight months earlier - in his bid to claim a "Vermillion prize", an intact but corrupted Standard Template Construct that would produce the mythic Men of Iron, which would allow him to supplant Slaydo's successor Macaroth and take over as head of the Sabbat Worlds Crusade.[1a] To that end, Heldane used mind control, trickery and outright torture to achieve his ends, first by tapping Colonel Draker Flense to intensify the feud between the Jantine Patricians (which Flense commanded) and the Tanith First and Only, who presented a possible roadblock in Dravere's plan.[1b] He also attempted to make Elim Rawne — one of the Tanith officers - into one of his pawns[1c], but he succeeded better in turning Fereyd, one of Macaroth's agents and an ally of Tanith commander Ibram Gaunt, to his cause.[1d] However, the psychic link connected not only Heldane's mind to Fereyd, but his life as well - as he discovered to his dismay when Fereyd was killed.[1d]

The psychic backlash of Fereyd's death ultimately killed the surprised Heldane - and in the wake of his death, powerful waves of energy lashed out from his dead body and incinerated Dravere's command Leviathan, killing the general and everyone onboard.[1d]