Lady Jena Orechiel was a female Inquisitor within the Ordo Xenos who was known amongst the ranks of the Inquisition for her blatant use of Xenos weaponry. She was the daughter of an estranged planetary governor, an acolyte in Inquisitor Dargasto's retinue before his death,[1] and the mother of Kal Jerico.[3] 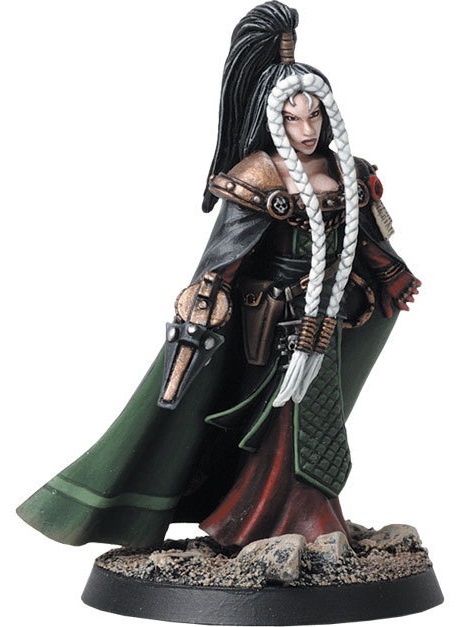 In her youth, she enrolled at the Schola Progenium of Ophilla, where she was constantly in trouble due to her extreme stubbornness and fierce convictions. One Drill Abbot, Belphus Meere, a retired Mordian Sergeant, even made it his personal mission to control her; but still she refused to bend to his will. Despite being overdue for transfer to the Sisterhood, the Schola Progenium deemed Jena to be "unprepared" and held her back. An agent of the Inquisition eventually arrived to assess her as a potential recruit, and agreed with the Chief Abbot's recommendations that Jena's steadfast determination and un-foundering drive were worthy traits of an Inquisitor. However, he deemed her "unprepared" still, remarking that her youth and pride were major obstacles that still needed to be overcome. This meeting changed Jena's life, and she soon launched herself into her studies with renewed vigour.[1]

Once Jena had reached a mature enough age, she was inducted into Inquisitor Dargasto's retinue, who shared her remarkable fascination with Xenos species and cultures. She was made a full Inquisitor after Dargasto died in a firefight with a Mechanicum Magos and his entourage of Techpriests during a search for an alien device that may have pointed to the reawakening of the C'tan. One of her first acts as an Inquisitor was to re-visit the Schola Progenium that she had enrolled in her youth and sequester her old "friend" Belphus Meere into her retinue.[1]

In the following decades, Inquisitor Orechiel carved out a notable career and a good reputation hunting down the enemies of the Imperium. However, she was often in conflict with the more puritan factions of the Inquisition due to her use of xenos weaponry (an Eldar Shuriken Pistol and rumours of Eldar association, which forced her to change her name many times.[1]

In recent years, she had come close to unraveling the mysteries of the godly C'tan. However, her old friend Belphus Meere was killed gaining that knowledge. Her current fate is unknown, but she was said to have embarked on her most dangerous and important mission yet.[1]

To keep her enemies (both within and outside the Inquisition) off track, Jena Orechiel has often changed her name, using a variety of aristocratic aliases allowing her to move freely through the circles of bluebloods in the Imperium, often the very people who court the attention of the Inquisition.[1]

These have occasionally been more than fleeting social relationships, and Jena has used her beauty to her advantage in the past to gain her objectives.[1] While on Necromunda under the name Heleana Jerico (an almost perfect anagram of Jena Orechiel), she became mother to Kal Jerico with Lord Gerontius Helmawr, the Planetary Governor. She later described this as "just one of the many disagreeable things one has to do for the greater good of the Imperium".[3b]

Returning after many years to Necromunda to recruit her son, she tested his abilities with Chrono-gladiator Krieger "Krash" Thrax,[2] and then ordered Vanyan Kloss to arrange an Arbites cull to flush him out of hiding and herd him in the direction of the Inquisitor's retinue, where he was subdued by the cyber-mastiff Wotan.[3a] Taking Kal to the Spire, she explained that she wanted to hire him for a single task,[3a] and, convincing him, they left Necromunda, followed by a Helmawr vessel, to await the arrival of the Space Hulk Kronos, where Kal was told they were planning to find some of the most precious lost tech-lore imaginable.[3b]

After finding the corpses of previous ill-equipped expeditions, the group (Inquisitor Orechiel, her daughter Merelda, Kal, Vanyan Kloss, Kroot mercenary Mordak, Magos Tarren and a number of Servitors) found themselves under attack from a horde of Warp-mutated parasite scavengers, which they promptly fought off, starting to prove Kal's skill to the team, sceptical after the loss of many previous gunslingers in the Inquisitor's employ.[3c] Travelling through the hulk past many traps, they came across bodies of Helmawr's troops, and followed their trail to find the remaining troops under attack from a giant disembodied floating alien head. The Inquisitor's retinue destroyed it and, as the Lady Inquisitor ordered the Necromundan troops to stand down, a group of Necron warriors arrived.[3d] The two teams fought off the Necrons, losing Magos Tarren and all but a couple of Necromundans, and continued towards their goal more rapidly after being informed of the arrival of an Inquisitorial Black Ship carrying Ordo Xenos Deathwatch Space Marines after the same objective.[3e]

Instead of following the day long journey that Inquisitor Orechiel's party had taken, the Deathwatch shot themselves inside the hulk in a boarding torpedo. Nearing their objective, Lady Jena told Kal the story of the C'tan and Necrontyr, explaining that the hulk was the tomb of one of the C'tan's most powerful servants which they are there to destroy, contrary to her earlier promises of priceless ancient technology.[3f] As they blasted their way into the tomb itself, Vanyan Kloss betrayed the Inquisitor, threatening her with his Heavy bolter and saying how he believed her judgment had become unsound as the Deathwatch arrived accompanied by Inquisitor Malva whom Kloss had been working for for some time. Malva gave the Deathwatch orders to dismantle the Sarcophagus and transport it back to his ship, but the Deathwatch Captain disagreed, saying that it was not what they had agreed, and that the Sarcophagus must be destroyed as were his orders; Malva promised to destroy it as soon was as possible, but Inquisitor Orechiel implored the Captain not to believe him, saying that Malva wanted to harness the power of the artefact for himself, and that she agreed it must be destroyed. While they continued to argue a massive energy surged through the chamber and its awakened inhabitants began to come to life,[3g] including the gigantic form of the Setekh, one of the most powerful Necrontyr weapons of war.[3h]

Aware that its rest has been disturbed and its tomb invaded, the huge Necron began slaughtering the Deathwatch that surrounded it. Lady Orechiel told her team that while it was still regenerating from hibernation the Setekh would be drawing power from the Sarcophagus, and that while destroying the thing itself would be impossible for even an entire Space Marine Chapter, destroying the Sarcophagus would weaken it. Merelda fearlessly ran out to begin the attack, shouting to Kal to race her, but was shot down by Kloss, protecting the device as a valuable asset which could be learnt from. In tears, Lady Jena ordered Mordak and Kal to get him, resulting in the Kroot disarming him while Kal used his unique Underhive combat style against the former Arbite in revenge for trying to kill his half-sister. The two fled as the Setekh approached and killed Kloss, and they continued fighting through the ranks of Necrons back to the rest of the team, now surrounded, as the Setekh killed yet more Deathwatch.[3h]

Meanwhile, Inquisitor Malva ordered the Blackship cruiser to teleport him aboard, and, seeing this, Inquisitor Orechiel told Kal to stop him. His arm holding the Homer teleportation device shot off, Malva was cast into the Warp instead of being beamed to the safety of the shop, and as Inquisitor Jericho reached the device she gave the order to beam them all aboard, just as the Setekh was poised to destroy them. Commandeering the vessel as soon as she was aboard, the Inquisitor gave the order to use Exterminatus cyclonic torpedoes to destroy the hulk. Burning, the Kronos was thrown back into the Warp.[3i]

When Lady Jena and Kal went to visit Merelda, still bedbound from being shot, Merelda told him that she wanted to give him her cyber-mastiff Wotan, finally having earned her respect. Returned to Necromunda, Kal declined the offer to remain in his mother's retinue, excited by the possibilities of his new pet in the Underhive.[3i]

Inquisitor Orechiel inherited Inquisitor Dargasto's Warband following his death.[1] Known past and present members of her retinue are listed here.

During the exploration of the Kronos