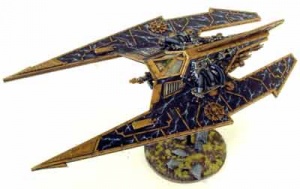 Hell Talons are fighter-bombers, and are the main aircraft employed by Chaos forces, including Chaos Space Marines and the more numerous Chaos militias.[Needs Citation]

Used in both aerial and space battles, the Hell Talon has a sleek form resembling an elongated double-axe head. Vectored engines allow for superior manoeuvrability. Superior in combat to almost any Imperial airship of any class. Its armament consists of twin-linked lascannons, either an autocannon or Havoc Launchers, and incendiary bombs.[Needs Citation]

A Hell Talon is sometimes daemonically possessed; in other cases they are piloted by a servitor hard-wired into the cockpit. Besides the pilot, the Hell Talon has two other servitor crew.[Needs Citation]

The Hell Talon, as well similar aircraft are presumed to be the products of a corrupted forge world Xana II existing within the Eye of Terror.[1b][2] In combat the Hell Talon swoops low, strafing targets with lascannons and autocannons, and engulfing enemies in the superheated fires of incendiary bombs.[2]