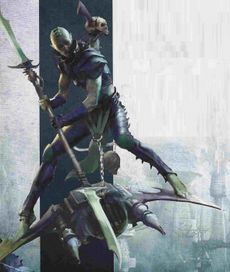 Hellions are reprobates and miscreants who are often made up of aspirants not yet old enough to become a Kabalite Warrior.[6] Hellion's form gangs that prey in the streets of Commorragh, existing on their wits alone and living savage lives that often see them battle Kabals as well as other rival gangs. They also have fierce rivalries with Reaver and Scourge gangs of the upper levels, resenting those who are more privileged than them. While they may outwardly maintain a rebellious attitude, in secret Hellion's yearn to become powerful in their own right.[6]

Hellions often maintain close ties to the Wych Cults, who provide them with various Combat Drugs and protection against other gangs and threats in exchange for performance in the bloody fights of the Cult's arena, as well as any realspace raids they may be hired out on.{{Fn|4}

Leaders of Hellion gangs are known as Helliarchs[6].