Hot-Shot Laspistols are typically hand-crafted, rather than mass-produced in factories, and most are hundreds of years old and have acquired histories over the course of centuries of use in combat. Unless otherwise specified, a hellpistol remains the property of the Departmento Munitorum, though an individual can be awarded one for heroic deeds. A hellpistol fires a higher-intensity shot than a laspistol, cauterizing just about any wound it causes and preventing blood from being shed. For this reason, hellpistols have been sanctioned for use as execution weapons for officers and commissars, as a shot to the condemned soldier's head will prevent any blood from staining their uniform.[1]

Associated with the fortress world of Cadia, this pattern of hellpistol has been adopted in places as far away as the Calixis Sector. Like other hellweapons the pistol draws energy from a 10 kg backpack powerpack, though it can also hook up to a larger 15 kg powerpack for more shots. Cadian-pattern hellpistols also incorporate an integral Targeter to assist the user while still allowing for a second sight to be attached.[3]

This hot-shot laspistol is produced on the Lucius Forge World and is a common sidearm for many Imperial officials. It can connect to a standard 10 kg backpack powerpack or a larger 15 kg powerpack for additional shots.[4][5] 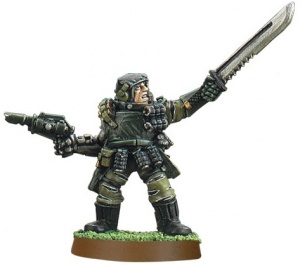