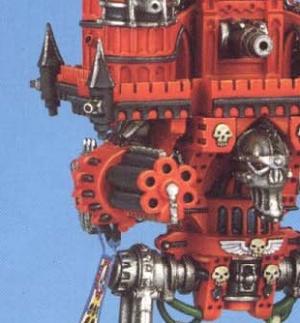 The Hellstorm Cannon is a massive energy weapon found on Emperor Titans.[1a]

The Hellstorm Cannon is a multi-barreled weapon capable of firing in quick succession, giving its wielder unparalleled firepower against enemy Titans.[1b] The Hellstorm Cannon can also fire all of its barrels in a single shot, but this requires lengthy recharge before it can be fired again.[2] Firing shells the size of battle tanks, a Hellstorm Cannon can quickly rearrange the landscape, carving out fresh canyons and collapsing entire hills to bury the enemy in thousands of tonnes of dirt and rock.[3a][3b] The cannon is able to strip the Void Shields from a Warlord Battle Titan in one volley.[4]