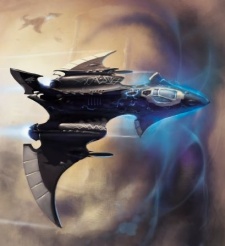 The Hemlock Wraithfighter is an Eldar fighter aircraft.

The subject of much controversy on Craftworlds, the Hemlock is one of the Eldar's ultimate weapons of terror and to use such a construct is to flirt with atrocity. Only in the most dire of circumstances do the Eldar deploy Hemlocks, for it blends the psychic ability of its Spiritseer pilot with the energies of the Eldar dead channeled through Spirit Stones in its Wraithbone core that functions as a miniature Infinity Circuit. The spirits within the Hemlock's hull can even operate the craft's on a basic level if the Spiritseer is incapacitated, which is useful given the constant mental strain the pilot constantly suffers. Each Spiritseer pilot risks being driven slowly insane by the whispering voices within his Hemlock, or having his own spirit join the ranks of the dead within the ghost craft, leaving behind nothing more then an empty husk.[1]

Yet these dangers are necessary given the arcane weaponry the Hemlock can wield. The Spiritseer's own abilities are magnified many times over by the mindshock pod in his cockpit, allowing him to send out a wave of terror from his craft that is capable of shattering the enemy with feelings of panic. Just as this fear reaches its peak, the Hemlock's spirits will fire the Heavy D-Scythes mounted under each wing, leaving behind no blast, damage, or trail, but rather only a stream of corpses as the victims souls are ripped from their bodies. Originally intended to sever a Tyranid Warrior's link to the Hive Mind, these weapons are even powerful enough to disrupt the engrams of a Necron Warrior. This is an act the Eldar have dubbed the 'Cutting of the Crone's Cord', for in Eldar myth the silvered strand that ties the soul to the body can only be cut by the Crone Goddess Morai-Heg. Thus to deploy Hemlocks is to defy their own culture's traditions and dogma.[1] 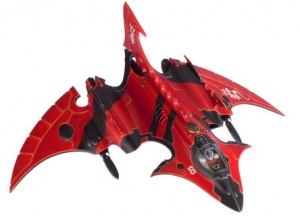