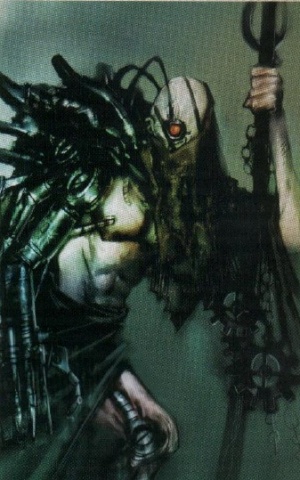 A Heretek is a member of the Adeptus Mechanicus who has strayed from its strictures and dictates, and betrayed the Cult Mechanicus by, for instance, weakening the Adeptus' stranglehold on the knowledge of the Imperium's technology, or embracing individual experimentation and innovation.[1]

Some Hereteks simply strive for power and knowledge. Such ambitious individuals may then realize the wealth of information that may be gleaned by straying from the teachings of the Archmagos Doctrinal.[1]

Most commonly though, the path that leads to life as a Heretek begins away from the Machine God's domains, like in service to the Inquisition or an Explorator cadre. Most Tech-Priests who are thusly led to a certain amount of self-reliance and forced adaptation will find that it strengthens their dedication to the Omnissian faith, however, a few Tech-Priests will instead start to question, to seek their own answers and rely on innovation to overcome adversity.[1]

No matter the reason for becoming a Heretek, it is a most dangerous way of life; for should a Heretek be found out by a member of the Cult Mechanicus, they face harsh punishment, often meaning either immediate destruction or having their implants ripped out to have whatever remains of their flesh converted into a servitor as penance.[1]

For this reason, Hereteks can, and logically speaking should, become increasingly paranoid and withdrawn. They will distance themselves from those who would discover their heresies, and will focus on self-preservation. Implanting ever more offensive and defensive systems to protect themselves and their pursuit of forbidden knowledge is common behavior for a Heretek.[1]

Note that a being a Heretek does not necessarily involve Chaos. Although Hereteks can certainly gain much knowledge about the Warp and be corrupted just like anyone else dealing with the secrets of the xenos, the Immaterium, and mankind's ancient past, they may just as well still be very much opposed to the Ruinous Powers. Their heretical approach to technology still makes them an abomination in the eyes of the Cult. This difference further distinguishes them from the Dark Mechanicum.[1]