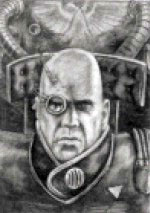 Herman von Strab was the Overlord of Armageddon during the Second War for Armageddon, during which conflict he became notorious for his disastrously inept leadership.[Needs Citation]Princeps Prime Kurtiz Mannheim of the Iron Skulls Titan Legion, who would eventually perish as a result of von Strab's orders, described the Overlord as "the greatest waste of flesh and bone born in the last five hundred years."[Needs Citation]

Herman was the fourth son of his father, Overlord Luthor von Strab, and rose to power the same way all others had done before him, through assassination of the other claimants to the throne - in Herman's case, his three elder brothers. He was not himself targeted by his brothers, who considered him too stupid, weak or unsophisticated to take him seriously as a rival - to their cost.[Needs Citation]

Anton, the eldest brother, was killed by a bomb planted by Herman at a banquet, which also claimed the lives of 322 guests. The second, Otto, was killed by a hit-and-run driver. The third, Vilhelm, was found in his room, his body riddled with bolter shells. Herman himself was found on the scene with a smoking bolter in his hand, but brazenly proclaimed Vilhelm's death to be a suicide. The authorities investigating Vilhelm's death were too afraid to confront Herman, for he was next in line for the throne. When his father died, from a suspicious combination of grief and spidervenom poisoning, Herman assumed total power over an entire planet.[Needs Citation]

He was known as a decadent ruler with little concern for the well-being of his subjects. He used fear to control the population to maintain his position of power. He was however, personally fearless (whether this was a sign of actual bravery or just blind stupidity is unknown) and ruthless to the point of insanity. When the Ork threat appeared, he had little grasp of the magnitude of the problem and had even less of an idea how to deal with it.[Needs Citation]

His incompetence was seen right from the very beginning of the second war. He was given several warnings about the potential invasion: The Imperial Tarot gave the same reading of disaster, time after time; Navigators on incoming freighters warned of a massive warp storm brewing; and the Statue of the Emperor in Hive Helsreach wept bloody tears. von Strab ignored them all.[Needs Citation]

Then the space hulk appeared from the warp in the Armageddon system. Instead of sending ships to investigate the hulk, von Strab simply said that no piece of "cosmic flotsam" could threaten his ancestral world.[Needs Citation]

He did only the minimum he needed to do to satisfy appearances. He complied with the standard instructions in the Codex Ministorum and notified the Administratum of the sighting, but that was all. Only after the first Orks landed did a distress signal go out, and von Strab then banished the sender of that message, Commissar Yarrick, to Hades Hive. von Strab didn't wish to trouble the Imperium with this fight, as he was confident he could deal with the Orks himself.[Needs Citation]

von Strab was an even worse military commander than he was a planetary governor: the poorly ordered forces he had at his disposal were quickly overrun and destroyed, and he adopted the tactic of small piecemeal attacks, which were quickly outflanked and destroyed. It was soon obvious that von Strab had underestimated the threat and cunning of the Orks.[Needs Citation]

One of the greatest failures for von Strab (and the worst blow to Armageddon) was the destruction of the Iron Skulls Titan Legion commanded by Princeps Prime Kurtiz Mannheim. von Strab ordered the Titan Legion to battle the Orks unsupported and they were soon eradicated by the overwhelming Gargant forces. Earlier, when von Strab had relocated to Hive Tartarus, Mannheim urged von Strab to prepare for invasion of Armageddon Secundus, but he was ignored, proclaiming that the Orks would never breach the equatorial jungles. Two days later the Orks appeared in Armageddon Secudus, pouring from the jungles. Mannheim died when his Titan's reactor went critical, but not before he walked it to the centre of the Ork force and wiped out a huge swath of the greenskins.[Needs Citation]

von Strab had one last secret weapon, a stock of deadly virus bombs from when the planet was first colonised. When he tried to launch them, most failed due to their age, many missed their targets, some refused to lift off, and the potent virus had weakened with the passing of time. It rent giant holes in the Ork forces, but nothing close to what was needed. von Strab retired to his bunker to sulk and he was not seen for a long time.[Needs Citation]

Then, when the Space Marines arrived and turned back the Ork hordes, Commander Dante of the Blood Angels took command, much to the annoyance of von Strab. He was then put under armed guard and house arrest, but escaped in a stolen Land Speeder. This was found later, badly damaged, but his body was never found. This was the last to be seen of von Strab in the Second War.[Needs Citation]

Von Strab took little part in the actual fighting of the Third War for Armageddon but it is rumoured that the fall of Hive Acheron was mainly due to sabotage of power lines and Orks appearing from secret tunnel entrances. He soon emerged and revealed himself to the population with Ork brute squads ready to put down dissenters. He made as passionate speech to the people, asking them to rise up against the tyrants of the Imperium. He was welcomed back by much of the old nobility as a long-lost prince, ignoring that he had joined forces with the invaders.[Needs Citation]

Eventually, with the appearance of Imperial forces, a bloody civil war broke out between the loyalists and von Strab's supporters. The forces of von Strab were forced down into the underhives. von Strab was killed in a secret mission by the 13th Penal Legion, under the command of Colonel Schaeffer.[1][2]