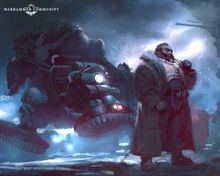 Hernkyn Pioneers are Leagues of Votann warriors who serve as scouts for their forces.[1]

The Hernkyn are rugged survivalist who set out in small, self-reliant bands to adventure and prospect on behalf of their Kin. Hernkyn leave their Kindred for decades at a time, forging out into the dark spaces beyond. In many galactic cultures such explorers are seen as shameful or rebellious, but for the Leagues of Votann it brings a high honor. This is because they serve a great purpose to the Votann, for their discoveries and insights ensures that when the Hernkyn finally returns to their Ancestor Core upon death, it will be benefited with new enriching data and knowledge. Besides this role, the Hernkyn also locate potential trading partners for their Kindreds, mark navigable void-channels, scout viable regions for settlements, and most importantly of all locate new resources to be exploited.[3]

To achieve all this however, the Hernkyn has to make great personal sacrifices. It is not easy for the family-focused clones to spend such extended periods of times away from their Hold, and the ever-present danger that they may never return to their Ancestor Core. That such souls are still willing to undertake these scouting expedition is yet another reason they are held in high regard in Kin society. To that end, they are equipped with the finest scout ships manned by the finest Voidmasters. They are also given a wide array of vehicles, and gunships, most notably Magna-Coil Bikes. They also make use of Pan Spectral Scanners to mark out natural resources the Kin would prize, using powerful claim-beacons to alert the Cthonian Mining Guilds to their presence.

In battle, Hernkyn serve as the armoured cavalry of Votann forces. They are extremely sturdy, highly mobile, and pack a tremendous amount of firepower. Hernkyn Pioneers are equipped with plenty of intelligence-gathering and scanner equipment, allowing them to serve as effective scouts as well. Wearing lighter suits of protection than the rest of their kin, they are true frontiersmen.[1] Hearnkyn Pioneers are heavily armed. While the bikers themselves carry Bolt Pistols and Bolt Shotguns, their bikes can wield formidable weapons such as the Ion Beamer, Magna-Coil Autocannon, and HYLas Rotary Cannon.[2] 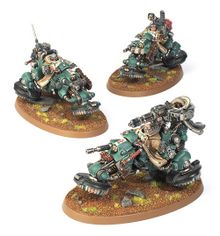