Heroes of the Space Marines (Anthology) 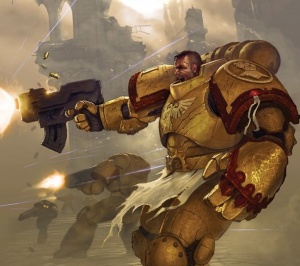 Heroes of the Space Marines is an anthology edited by Nick Kyme and Lindsey Priestley.

Honsou is on New Badab in the heart of the Maelstrom with the intention to win the Skull Harvest, a contest between warbands where the champions of said warbands fight each other to determine which leader gets control of each other's men. Only one warband can survive and Honsou intends to be the victor... with the ultimate aim of leading a new army into the heart of Ultramar.

An Imperial Fists Scout bike squadron are pursued across a desert by Ork Speed Freaks. It's a trap!

Amidst heavy casualties and combat unceasing, a number of Space Marines of the Avenging Sons chapter — currently on "penitence patrol" due to previous dishonourable actions - grow disillusioned with their role in the quelling of a global uprising and decide upon a most rebellious course.

Scaevolla, a veteran of the Great Heresy, Black Legion champion and squad-leader, is compelled to seek out and duel the genetic descendants of his once-friend and eventual enemy, Captain Aleph of the Imperial Fists. As much as he enjoys such hunts, he also despairs at his personal, seemingly eternal role in the Long War, apparently blinded to the easy way out by his Chaotic masters...

This story tells of an encounter by the Salamanders Space Marine Chapter battling Chaos forces and the Dragon Warriors Chaos Space Marines.

A Chapter of Renegade Space Marines, the Sons of Malice, gather on a space hulk for traditional slaughter and competition.

A Deathwatch Kill-Team of Space Marines board an Ork ship on a mission to recover the head of a Weirdboy Warboss.

And They Shall Know No Fear...

Main article: And They Shall Know No Fear... (Short Story)

Stygia XII has turned from the Emperor’s light, gripped by the dark powers of Chaos. Castellan Reinhart and his warriors arrive on the world, greeted by representatives of the Inquisition and the Sisters of Battle. But are the Black Templars on Stygia to help the beleaguered defenders, or for their own sinister motives?

On the world of Sarastus, the True Night has fallen. Young men take part in a Chaotic ritual that they don't truly understand, but one thing is for certain: the only victors will be the traitorous Night Lords.

Renowned as some of the staunchest defenders of humanity, surely it is inconceivable that marines of the Crimson Fists Chapter would ever shrink from bringing death to the Emperor's enemies? In the wake of the Battle of Rynn's World, however, priorities may have changed for these sons of Rogal Dorn. Is the future of the beleaguered Chapter more important than the hate of the foe that provides their honour? On the battlefields of Syral, Chaplain Argo finds himself facing that dilemma.