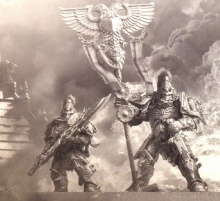 Members of the Hetaeron Guard

The Hetaeron Guard, also known as the Companions[2], are an elite sect within the Custodian Guard. Serving as the personal attendants to the Emperor himself, they are one of the two sub-factions of the Hykanatoi Caste of the Custodes along with the Sentinel Guard.[1]

The Hetaeron Guard is a 300 strong[3] unit of warriors which formed the inner circle within the Custodian Guard, serving as the Emperor's protectors, aides, and confidants and were noted for rarely if ever leaving his side. Each of its members was individually selected by the Emperor, and they represented the most formidable fighters among the Custodes. During the earliest years of the Great Crusade these warriors would appear on worlds that were personally reclaimed by the Emperor.[1]

Following the internment of the Emperor to the Golden Throne, the Hetaeron Guard has maintained an eternal vigil over the Sanctum Imperialis and symbolically wear black cloaks[2] over armour blackened as a result of their prolonged exposure to the Emperor and the core of the Throne. One of the two Tribunes of the Adeptus Custodes is the master of the Hetaeron Guard and chooses new inductees to maintain their number.[4] The Companions never leave the Emperor's side, standing unmoving, unspeaking, and constantly ready for battle. Even a Custodian finds this duty physically and spiritually exhausting, and members are rotated out of the Companions when the Captain-General believes they have served long enough. Over time, their armor is charred black by the Emperor's power.[6] The longest Companion's Watch was a full century served by Astoran Kalos.[5a]

After completing of their service in the Hetaeron Guard Adeptus Companions often become Aquilan Shields.[5a]

Unlike many of their Custodes brethren the Companions have not ventured out into the greater Galaxy to Crusade since the resurrection of Roboute Guilliman.[3] 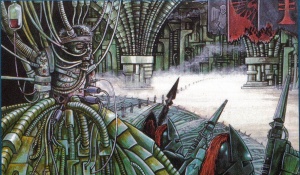 The Companions was the term given to the elite cavalry of Philip II and later Alexander the Great, often acting as his personal guards.