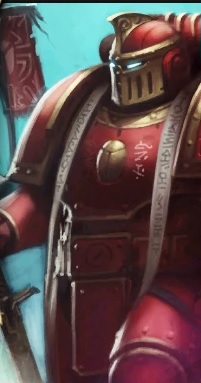 The Hidden Ones were the Scouts of the Thousand Sons Space Marine Legion, active for much of the Great Crusade and the Horus Heresy. Their status after the legion's transformation into the Chaos cult legion of Tzeentch is unknown.

Little else is known of the Hidden Ones and the method in which they were deployed. Their commander was Amon, 9th Fellowship Captain of the legion and Equerry to Magnus the Red. Amon was noted to have trained the Hidden Ones personally.[1]

It is possible that the Hidden Ones were not Astartes Scouts in the traditional sense; that is, not new recruits employed as reconnaissance troops, but a type of infiltrator far more insidious. Evidence for comes not only from the Hidden Ones being referred to as the Scout Auxilia, but also from the revelation that Kasper Ansbach Hawser was a Hidden One of the Thousand Sons despite being completely unaware of this possibility for most of his known life. Hawser operated as a deep-cover spy planted inside the Space Wolves legion apparently by the Thousand Sons, who had psychically (and perhaps sorcerously) reprogrammed his mind so that he would go to Fenris and become attached to the Space Wolves. From this position his handlers in the Thousand Sons - believed to be Amon and even Magnus himself - could perceive his experiences and glean secret intelligence on the inner operations of the Wolves of Fenris.[2]

It should be noted that most of the information concerning Hawser's status as a Hidden One came from a power of the warp masquerading as Amon of the Thousand Sons and that Hawser - though believed to be a Thousand Sons deep-cover spy planted within the Space Wolves by such august personages as Leman Russ, Fulgrim and Constantin Valdor - may have in fact just been designed to appear as a Hidden One by the machinations of Chaos. Therefore, while the information given about the Hidden Ones appears reliable, the fact that the only one known of currently was possibly not one at all makes most of what we know about them uncertain.[2]