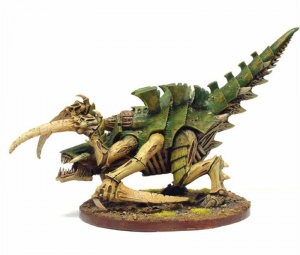 The Hierodule is a large Tyranid Bio-construct, around the size of an Imperial Super Heavy Tank.

Like many Tyranid creatures the Hierodule seems to be a mutable breed, able to be created in different forms depending on the needs of the Hive Fleet. There have been two different forms of Hierodule observed by Imperial forces so far, namely the "Scythed" and the "Barbed" variants.[1a] 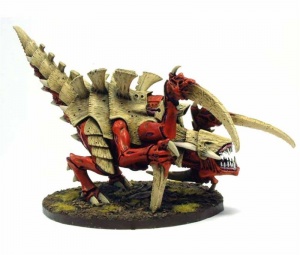 The Scythed Hierodule has only been encountered in a single tendril of Hive Fleet Kraken and there infrequently but their appearance surely will grow with time. Xenos Biologists have tried to capture a live sample, but have, so far, failed because every Xenos Hunter team, sent on the quest, have failed to return.[Needs Citation] The finding of a non-alive sample is also a problem because every one of the extracted Hierodules was almost totally destroyed by the heavy weapons fire.[1a] 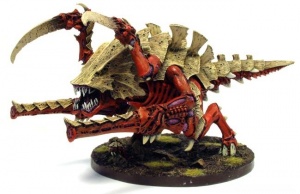 After losing Harmman's World to Hive Fleet Kraken, the Imperial forces reinforced the Moran System. The assault, by Hive Fleet Kraken, was soon manifested. While the Imperium had learned from its losses, the Tyranid had evolved. The Hierodule had evolved into the Barbed Hierodule with a powerful ranged attack. It was quite a shock to the Imperial forces when it appeared on Maxima Moran.[1a]

The Barbed Hierodule replaces two of the Scythed Hierodule's claws with a pair of massive Barbed Strangler bio-cannons. Unlike the Scythed variant, it has no symbiote acid spray but instead has thicker armour plates.[1b]

The original epic scale Hierodule model produced in the mid 1990s depicted the creature to be larger than its more modern Forge World counterpart. In this incarnation it was only slightly smaller than the Hierophant, therefore closer in size to a Titan compared to the current creature which is closer in size to a Super Heavy Tank.[3] 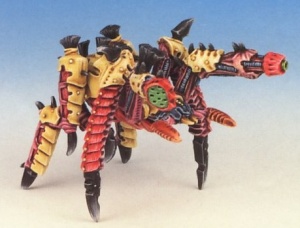