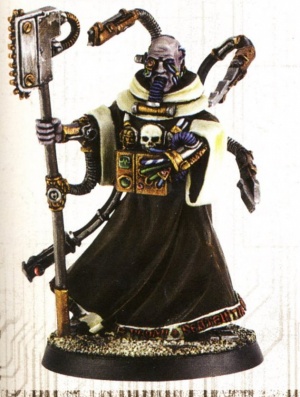 Tezla was trained on the Forge World of Stygies VIII as a Runic Priest. Runic Priests specialise in certain branches of scientific lore which are frowned upon by the more mainstream branches of the Adeptus Mechanicus such as intuitive mechanics, speculation and improvisation.[1]

Tezla excelled in these areas and was recruited into the ranks of the Xenarites before his training was even completed. The Xenarites specialise in the study of Xenos technology and Tezla rapidly became an important member of their sect, showing a natural talent for locating and studying alien artefacts, and an enquiring disposition.[3a] His examination of a crashed Fra'al spacecraft in the Tamahl sector and his subsequent etheric-plasma theorums won him great renown amongst his peers. Similarly, his studies of Ork power field generators on Polaris are considered to be the authoritative texts on the subject.[1]

Recently Tezla's interests were drawn to the Eldar Maiden Worlds of the Halubra Fringe. He was last heard of leading a heavily armed force of servitors to the moon of Eldrathon IV where he hoped to discover a buried Eldar warp-portal.[1]

He has also since become a Manipulus.[2]

'"Yes, by way of scripture, it is not for us to question the divine Omnissiah by studying the technology of alien races. However it is my belief that the Machine God has lain the full panoply of xenological study before us for precisely that reason. I believe His Will is that we should observe and catalogue all forms of science, not only those forged by the hand of Mankind. By such study we become better able to appreciate the technological wonders of Humanity itself."
+++ Hieronomus Tezla, addressing the Vulcanis Symposium, 782.M41+++[1]

Tezla generally carries a Chain axe and Laspistol, and is equiped with various bionics including a bionic eye, bionic leg, mechadendrites and a re-breather. He also carries a "Temporal Phase Distort Generator" - a unique piece of equipment, built from ancient Necrontyr technology, which can render Tezla partially insubstantial and therefore impervious to harm, although at the risk of malfunction which can inflict great pain and injury upon him.[1][3b]