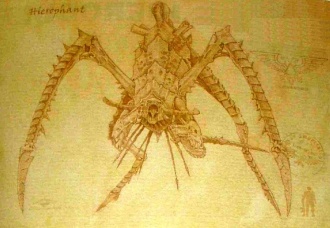 The Hierophant biotitan is an immense, hideous creature, towering over the battlefield and bristling with spines, tendrils and symbiote weapons. They are amongst the largest bio-creatures yet encountered amongst the swarms of the Tyranid hive fleets, comparable in size and power to an Imperial Titan.[1] 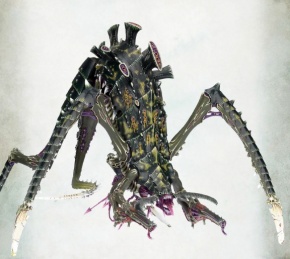 A brood of Hierophants are likely to be at the forefront of a major Tyranid attack. They are armed with massive Bio-cannons, multiple claws and chitin blades, and armoured with a thick chitinous hide that exudes poisonous spores from rends in the plates. In addition, the creature's vulnerable belly region is protected by spiny tendrils which lash out at any enemy who gets too close. These tendrils are capable of impaling or strangling with incredible force. As a last defense, the Hierophant is equipped with poisonous sacks that exude a gas lethal to non-Tyranid creatures.[1]

Like all Tyranid creatures, the bio-titan seems to be able to mutate rapidly, evolving new weapons and defences. Other variants of the biotitan have been identified with huge crushing claws or long scything blades, cluster spines and other bio-weapons.[2]