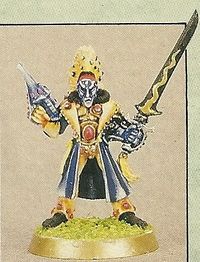 High Avatars, also called Ardathairs, are a type of Harlequin.[1]

The leader of a masque, who performs much the same role as the lesser Avatars, but on a grander stage. They will take on the role of the Laughing God when the masque performs as one company, with Avatars playing the roles of the other Eldar Gods. Their costume choice is notable in that High Avatars favour face-masks that either display daemonic or angelic visages, or that of the Laughing God himself.[1]