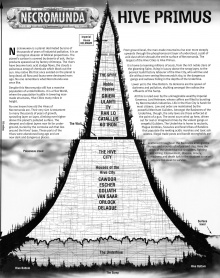 The upper hive is the region in which the administrators of the hive and various important people live. The homes are better, space is a premium and power is free for all. Life is easy here.The spires are the furthest from the horrors of the lower levels and as such are the best fitted. They are for anyone visiting the planet, giving the best view of the surroundings. Some hive spires pierce through the cloud barriers giving a huge area to watch over.

The Underhive is the most run-down area where most of the rules are created by gangs. It is a difficult place to live where the power has long been turned off. People rule through fear and shun the rich above them in the better apartments.[Needs Citation]