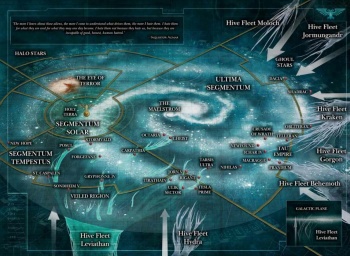 Hive Fleet incursions on the Galaxy

Hive Fleets are massive locust-like Tyranid swarms, comprising billions of creatures including the actual bio-ships, living spacecraft used to cross interstellar space and the voids between galaxies. Each creature of the Hive Fleet is an inseparable part of the Hive Mind.

An entire Hive Fleet is directed by the single coordinating will which is its Hive Mind, formed from untold billions of individual consciousnesses, each of which is a living creature in the fleet. Mankind still searches vainly for the higher beings they suppose control the Hive Fleets, and though such mighty creatures exist, they no more control the Hive Mind than single brain cells control a man's body. It is the sum of the Hive Mind which motivates it, not its constituent parts.

The bio-ships contain everything required to sustain the fleet; some ships being purely for crushing resistance, the larger ships contain birthing pools to create the huge land armies of the Tyranids and even more ships when the need arises. The nutrients used as food and raw material are replenished by scouring conquered planets of every cell of biological matter, including all the Tyranids it seeded onto the planet. Because the Tyranid forces are recycled in this way, the "design" of the Tyranid warriors can be altered by genetic engineering, allowing the Tyranid forces to rapidly adapt to overcome any enemy. Further, the Tyranids absorb the DNA of defeated enemies, allowing for further genetic diversity. It is believed the Genestealer and Broodlord are derived from Human DNA, the Zoanthrope from Eldar and the Biovore from Ork DNA.

By the adaptive nature of the Hive Fleets, fierce resistance on a planet will only make the fleet stronger in the end; for this reason only a few tactics have been found to work. The first is to draw the Tyranids into a large ground battle, forcing the fleet to deploy as large a ground force as possible. Once this is achieved, the planet is evacuated, following with Exterminatus as the Tyranids strip the life of the planet. This tactic is effective as Hive Fleets are dependent on the impetus gained from absorbing each conquered planet; the Hive Fleet will also have lost the biological "energy" expended to conquer it, including all of the bio-material of the ground forces and by the nature of Exterminatus will not be able to recover any from the planet. This tactic is extreme and also damaging to the Imperium, as it destroys a valuable and habitable planet every time. It has been projected that there may not even be enough habitable planets in the galaxy to stop the Tyranid threat, especially if more Tyranid fleets arrive from outside the galaxy.