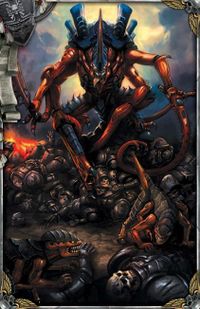 Dagon is a minor Tyranid Hive Fleet, currently active in the Eastern Fringes and the Jericho Reach region, mainly in the Orpheus Salient. A splinter fleet of Hive Fleet Behemoth, it detached before the latter's destruction in the First Tyrannic War.[1]

Dagon launched a surprise attack on Imperial forces of the Achilus Crusade in 817.M41, sowing widespread death and confusion thanks to the Shadow in the Warp. The Hive Fleet has consumed at least nine inhabited worlds while immediately threatening six more. The fate of more then twenty other systems lost in the Shadow in the Warp remains unknown.[1]

Herisor was the first world to fall to Dagon, followed by attacks on Freya and Zanatov's Harbour. Since the discovery of Freya's ruination in early 814.M41, Deathwatch forces became aware of the Tyranid incursion. Only with their help has the Achilus Crusade managed to stall Dagon's advance. Currently, the Hive Fleet is well supplied with bio-mass, and as such it represents a substantial threat to the Jericho Reach.[2a]

Dagon is currently scouting various systems, with Vanguard Drone Ships that have been found in over twenty systems. When the Tyranid Hive Ships enter a system, they immediately assault any habitable planets, while ignoring any Imperial space stations and outposts on otherwise barren planets and moons. Imperial vessels have only been attacked after they directly engaged the Tyranid void travelers. These are a few of the reasons why the commanders of the Achilus Crusade believe that the Hive Mind is operating in a conservative fashion, or else unable to recognize these as worthwhile targets. On Castobel, Atonement, and Hethgard, Imperial defenders managed to repel enough of the Mycetic Spores that the battles for control of these planets have become protracted engagements. On Avalos and Treyen, Imperial defenders even managed to repulse the initial Tyranid attack, causing the void-faring Tyranid creatures to leave those systems.[2a]

Dagon's Tyranids are very similar to the ones of Hive Fleet Behemoth, with new creatures and subtle changes in appearance from some of the previously identified strains. These variations include exoskeletal structures, colourations, and the most commonly observed weapon symbiotes used by the different Tyranid strains.[2a]

The most distinctive change shown by Hive Fleet Dagon is a variation in the hues of the different Tyranid creatures. The carapace on specimens from Hive Fleet Behemoth typically ranged from jet black to a deep blue. The unprotected skin of those species was typically a bright red. In contrast, the exoskeletons of Hive Fleet Dagon are generally dark grey or a blue close to that used by the Ultramarines Chapter. In portions of the xenos where their flesh is unprotected, it is a burgundy colour.[2a]

In addition to symbiotic modifications, these Tyranids have a higher propensity for toxicity, with Venom Sacs more prevalent near their claws and fangs. This has increased the mortality rate of Imperial forces in the Orpheus Salient. These toxins also show a substantial range of variation. Imperial medicae personnel have been unable to identify an antiserum that works consistently against the toxins.[2a]

This Hivefleet has a few variant specimens that are believed to be completely novel, including:

Harpies were a significant force on the attacks on the Fortress world of Hethgard, a key strategic location in the Orpheus Salient. Numerous Imperial combat personnel, including Adeptus Astartes of the Space Wolves and Storm Wardens Chapters, recount witnessing the sky obscured by winged Tyranid creatures and entire mountainsides transformed into masses of thousands of roosting Harpies.[2b]