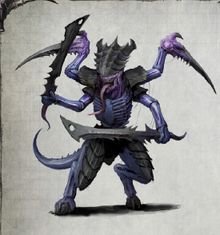 Hydra is a minor Tyranid Hive Fleet awoken prematurely from an aeons-long hibernation and is now advancing into the Galaxy to slake its hunger. It was first encountered on the very extremes of the eastern spiral [1] or in the galactic south[2], depending on the source. Hive Fleet Hydra is known to multiply and regenerate at terrifying speed, a trait that its largest beasts to lowliest maggots display. Hydra is currently targeting other, older Tyranid Hive Fleets in order to cannibalize them for unknown reasons[3], though it may be the explanation for its ability to rapidly multiply and regenerate.[4]

Hydra maintains a huge abundant of biomass, which in part allows for it to suddenly create such enormous invasion forces. It has also absorbed the memories of those Hive Fleets it has consumed, giving it a level of cunning against galactic foes far and above its age and station. During the early stages of an invasion, its hive ships seed the upper atmosphere with vast shoals of Tyrannocytes within which slumber broods of Warriors. When bioforms fighting on the surface meet stiff resistance, they send out pulses through the synaptic network as they die. These signals trigger the floating Tyrannocytes, which groundward bearing their monstrous cargo to the spot where their fellows were slain. Thus, in slaying one brood of warrior organisms, prey soon find themselves facing thrice the number of foes.[6]

Dark Eldar of the Kabal of the Poisoned Fang encountered the still-dormant Hive Fleet Hydra. Instead of destroying it, the Dark Eldar boarded the largest bio-vessels, intent on bringing specimens back to the Haemonculi. However, they were unprepared for the rate at which the bio-ships awakened. Every pirate that set foot inside one of the vessels was killed, butchered by a tide of rapidly spawned Tyranids. Those Dark Eldar still aboard their vessels attempted to escape, but for every drone ship they destroyed two more took its place. Prematurely awakened from its slumber, Hive Fleet Hydra accelerated its advance into the galaxy to slake its hunger.[4]

A strike force of White Scars hunted the Hydra across the sand dunes of Haadekh. Veterans of countless xenos wars, the Space Marines knew that the best method of fighting Tyranids is to cut the head from the beast, sending the swarm into confusion. However, each synapse creature the White Scars slew sent out a psychic scream, attracting fresh swarms of Tyranids to their location. Soon they were surrounded. Warriors to the end, the White Scars sold their lives dearly. Their sacrifice drew Hydra’s swarms away from Haadekh’s equatorial cities, giving the Imperium time to evacuate key personnel.[4]

After months of campaigning, the armies of Lord General Syvar Daeus turned back a tendril of Leviathan from the borders of the Corilanus System. In his honor a great Imperial Triumph was held on the planet of Ollfyre. Just as Daeus’ legions reached the Plaza of Fallen Heroes, shadows began to fall across the millions of onlookers. Looking up, the terrified populace saw its doom approaching – countless spores darkened the skies, and beyond that vast, organic shapes drifted into orbit, blocking the light from Corilanus’ binary suns. The Hydra had come, drawn by the death throes of its defeated kin.[4]

On the Imperial Agri World of Methuselax, Hydra landed vast eater-swarms to overrun the planet. Due to the risk of spillage into a nearby Webway gate on the world, the Harlequin Masque of the Soaring Spite led a coalition of Saim-Hann and Wych Cults to destroy the threat. Unable to land on the ground amid the swarming Tyranids, the Eldar instead remained airborne and launched pinpoint strikes against synaptic node-beasts. Though casualties were high for the Eldar, they managed to inflict enough losses on the Tyranids that the Hive Mind judged the biomass expenditure to outweigh the yield. Thus Hydra's forces drifted away, leaving a dead world but a safe Webway Gate.[5]