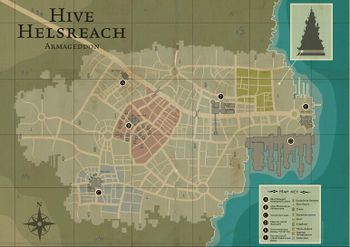 Hive Helsreach is a vast Hive city on the Imperial world Armageddon[2a][5b], devoted primarily to the production of fuel.[2b]

Located on the southern coast of the continent of Armageddon Secundus[5b], it has vast docks and a link to the Deadlands far to the south in the form of an underwater pipeline.[2c]

The settlement that would eventually become Helsreach was the first and oldest settlement established by the original Imperial settlers of Armageddon. The settlers' achievement was immortalised in the form of the Temple of the Emperor Ascendant. The temple would eventually host a Sanctorum of the Order of the Argent Shroud, who maintained a number of relics carried by the settlers.[2e]

During the first war, the hive didn't feel any particular damage, as it is located in Armageddon Secundus, which was behind the line of defending Space Wolves and Imperial Guard. Although the forces of Chaos were about to begin a march on Hive Infernus and Helsreach, the Grey Knights teleported directly into combat with Angron, banishing his soul for one hundred years.[Needs Citation]

It is said that just before the Second War for Armageddon began, the earliest warnings of the coming Ork invasion were at the Statue of the Emperor in Hive Helsreach, when it is said that it wept bloody tears. When the attack came, two Ork tribes struck off for Hades Hive and one to Hive Helsreach. The population were heartened by the defense of Hades Hive and put up massive resistance. Orks were ambushed at every turn and the citizenry used improvised weaponry to arm themselves.[Needs Citation] The supertankers that had arrived in the port were converted to transport non-combatants away, although they were forced to take more and more citizens when it was clear that there was insufficient space on the tankers for everyone in the Hive.[5a]

Once the last ship had sailed, each member of the new Hive Defense swore an oath to sell their lives as dearly as possibly. Suicide bombers would leap into the fray and destroy an entire patrol for the loss of one life. Those who worked in the harbour welded themselves into their cranes and attacked Gargants for as long as they could. Eventually even the Orks began to wonder whether it was worth continuing the attack as so many Orks had died already. The defenders of Hades Hive took solace and comfort from the unwavering defense of Hive Helsreach.[5a]

Finally, the Hive fell when a large group of Ork Wyrdboyz unleashed a huge psychic storm which exploded the minds of many and drove the remainder insane. The Orks then entered the Hive and slaughtered the defenders to the man.

The Third War for Armageddon saw the bloodiest fighting around Hive Helsreach. Again it was its port facilities that drew the attention of the Orks as well as the prospect of a good fight. It was estimated that around three million humans died in its defence.[3]

The Black Templars Chapter led a crusade in defence of Helsreach, dubbed the Helsreach Crusade, led by Reclusiarch Merek Grimaldus.[2a] They were supported by Imperial Guard Regiments of the Armageddon Steel Legion, Titans of Legio Invigilata and the Imperial 5082nd Naval Wing.[2a]

Along Hel's Highway, Ork forces often broke through the defences and assaulted the north of the Hive. Despite these constant attacks and setbacks, the population of Hive Helsreach fought like their forefathers, with a vigour and zeal that made the Orks pay dearly for every inch of ground they took.[3]

In the aftermath of the Crusade, it was evident that Helsreach had suffered dearly. Less than 10% of the hive's industrial output remained after the siege[2d] and many important areas of the city were left in ruins or completely destroyed, including the docks and the Temple of the Emperor Ascendant.[2d][2f] Of the several million Imperial citizens who dwelt there, more than 75% were killed.[4]

This is the table of the results of the Armageddon Campaign showing the strength of control of the Orks and Imperium over certain areas.[3]