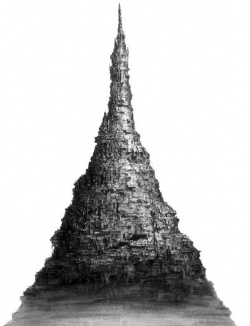 Artwork of Hive Primus from the 2003 Necromunda Rulebook.[2]

Hive Primus (or Hive One) is the capital of the Hive World Necromunda, and the setting for the Necromunda game. The hive is known across Necromunda as the Palatine after the fortified palace of Planetary Governor Lord Helmawr which is located at the top of the hive's spire. It is the largest hive on Necromunda, and is part of the Palatine Cluster, which consists of several hive cities separated by many miles but connected at different levels through a network of travel tubes and through roads across the wastelands.[Needs Citation]

Primus is effectively the planet's only spaceport, as it possesses the only shipyard and landing field large enough to handle orbital carrier ships. This is intentional on the part of the planetary government, as it ensures the planetary ruler, Lord Helmawr has a monopoly in off-world trade.[Needs Citation]

The Imperial Fists Space Marines maintain a fortress in the hive - the original purpose for the Imperial Fists' presence on the planet being to clear out an invasion of Orks, which had occupied and devastated three entire hives. The presence has since become permanent.[Needs Citation]

Necromunda's fortress-precinct - the Adeptus Arbites planetary headquarters - is also located in the hive.[3]

Hive Primus's Spire forms the hive's upper layer, penetrating the cloud and pollution cover. It is the domain of the six Noble Houses and of Lord Gerontius of the Imperial House Helmawr. [Needs Citation]

Below the Spire is the Hive City, separated by a large adamantium barrier known as "the Wall". The Hive City is five miles in height and home to billions of people. [Needs Citation]

Hive City is controlled by six Houses of manufacturers that control their own section. Each of these powerful Houses controls a number of hive gangs which enforce the Houses' territorial control.

Below the Hive City is the more polluted, violent and lawless Underhive. There is no constant or definite border separating the Underhive from the main hive city. Fighting between the gangs of rival Houses is mostly confined to this level of the hive.

The very bottom of the Hive is a dangerous area that is structurally unsound and only mutants or similar dangerous creatures can live there. It is known as the "Sump" and is by all intents and purposes uninhabitable.[2]