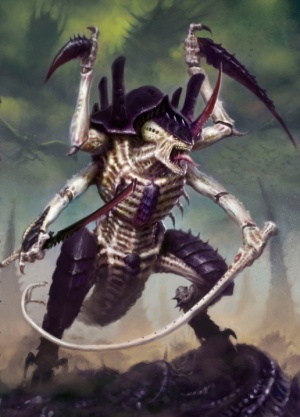 Hive Tyrants are monstrous Tyranid creatures created to be commanders of the Tyranid swarm. They embody the Hive Mind completely and act as the primary Synapse conduit through which it enforces its will over lesser Tyranid creatures. Hive Tyrants are extremely powerful, large and strong monsters three times the height of a man that can tear through plasteel or ferrocrete as if they were glass. They excel in both close combat and ranged fighting, and in fact every part of their body is perfectly designed to maim and kill. They are highly mutable, with individual Hive Tyrants displaying a wide range of physical characteristics, biomorphs, and bio-weapons.[1a] 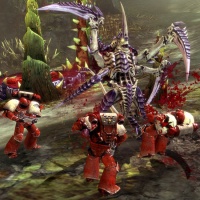 Unlike most other Tyranid creatures, Hive Tyrants are completely self-aware, incredibly intelligent, and can learn from their mistakes. Some possess an instinctive cunning that borders on tactical genius. Though in the end they are still ultimately slaved to the Hive Mind, their relationship with it is closer than that of any other Tyranid creature. This makes them terrifyingly psychic and able to manifest deadly psychic powers in battle, including being able to invigorate the Tyranid swarm, destroy the foe's morale, or shred the enemy's minds. Hive Tyrants are equipped with a range of Biomorphs, but most common are the Bonesword, Lash Whip, Heavy Venom Cannon, and Stranglethorn Cannon.[1a]

Hive Tyrants are essentially immortal, as their experiences, character and knowledge are stored within the collective consciousness of the Hive Mind. Should one be slain in battle, a replacement body can be grown and imbued with the same experiences as its predecessor.[1a]

Hive Tyrants appear to be either a more complex and highly evolved form of Tyranid Warrior, or else they evolved from a completely different and higher genus. Some Imperial techno-magi believe that Hive Tyrants are the consort-minds of the Norn-Queen that forms the repository of the Hive Fleet's own collective consciousness, which would mean they completely embody the Hive Mind, but their destruction would not diminish it in any way.[5] 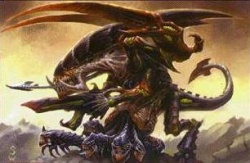 In Warhammer 40,000: Rogue Trader, the term "Hive-tyrant" applied to the ruler and primogenitor of the whole Hive Fleet - they were described as immensely psychic, huge, bloated with eggs and virtually immobile. The destruction of this Hive-tyrant would disperse the fleet[4].

This description fits the Norn-Queen of more recent publications. It was during the second edition of the game that the position of the Tyranid Hive Tyrant in the Tyranid hierarchy changed to its current position; not the highest embodiment of the hive-mind, but the largest version commonly encountered in battle[Needs Citation].