Trooper Hlaine Larkin, also known as Mad Larkin, Mad Larks or simply Larks, was an Imperial Guard Sniper in the Tanith First and Only Imperial Guard Regiment.[1a][3a] He served in this role almost from the inception of the regiment, swiftly becoming recognised as the regiment's pre-eminent marksman. As a result of his elite status, Larkin was regularly selected for special operations assignments and amassed a noteworthy service record as a result.

Originally a hunter in Tanith's nalwood forests, Hlaine Larkin later served alongside Forgal and Colm Corbec in the Tanith Magna militia before joining the Guard as part of the originally founded Tanith regiments, sharing a tent with Colm Corbec and Elim Rawne on the night before the regiment was to ship out.[2a] He survived the razing of Tanith and his sniper abilities quickly elevated him to an elite status within the regiment.

Larkin was in his early fifties when he enlisted.[3a] Though he was the Tanith's premier sniper, Larkin was also mentally unstable, suffering from anxiety-related migraines, fits, and delusions.[2b] One of Larkin's eccentricities was that he believed the scope of his long-las would always show him the truth, no matter what delusions he was suffering.[2b][3a] The apparent truth of this superstition was proved on Monthax, when looking through the scope allowed Larkin to see through the illusions cast by Eldar Farseer Eon Kull.[2c]

On Bucephalon Larkin succumbed to terror and abandoned his comrades, winding up in an abandoned church where he hallucinated that a statue of Saint Sabbat was talking to him. With the help of this 'angel' Larkin was able to kill the enemy Magister Nokad the Blighted, a significant early victory for the Ghosts.[2b]

During the campaign on Fortis Binary Larkin was attached to the regiment's first squad as its sniper.[1a] In this role, he ended up attached to Colonel Corbec's company during the Tanith counter-attack that would act as the catalyst for Imperial victory (the regiment was heavily dispersed by shellfire at the onset of the attack, and it is unknown if Larkin's squad actually belonged to Corbec's company) and was soon after attached to an ad hoc scout team the Colonel created, led by Sergeant Grell.[1b] This scout team led the rest of the company into linking up with the bulk of the dispersed regiment, behind enemy lines. After achieving unit cohesion, the Tanith 1st, with the aid of the Vitrian Dragoons, penetrated the Shriven defences, in an attack in which Larkin used the Needle-pattern sniper rifle he was then issued with to seriously wound an Iron Warriors Chaos Space Marine, as well as slay a host of more human enemies.[1c]

In the rest and recuperation period afterwards, Larkin took time out to visit illegal gambling dens on the world of Pyrites in the company of Trooper Bragg, as well as get tangled up in an incident with the Jantine Patricians regiment that would lead to a blood-feud.[1d]

This feud developed murderously while both regiments were in-transit to their next combat theatre in the Menazoid Clasp, both because of the feud's natural ire and because it was the will of the Jantines' secret patron, Inquisitor Heldane. Larkin became directly involved when Major Rawne of the Tanith was kidnapped by the Jantine and delivered over to Heldane for torture. Larkin was assigned to the revenge squad sent to cause havoc and get Rawne back[1e]; during this successful rescue he shot Heldane (not knowing he was an Inquisitor at the time) in the throat with a bullet from the solid-round, bolt-action rifle he had recently gained as a spoil of war, critically wounding the radical Inquisitor.[1f]

Larkin then deployed onto Menazoid Epsilon with the rest of the regiment, being seconded once again to a special squad, this time the commando unit formed from hand-picked members of the Tanith and Navy Intelligence, which penetrated a secret underground complex upon the world and discovered a working Standard Template Constructor.[1g][1h] Ultimately, the STC was proven to be corrupted when it produced several tainted and hostile Men of Iron, which the survivors of the commando team - including Larkin - briefly engaged with in close quarters combat before retreating and blowing up the entire facility.[1i][1j]

In the closing stages of the Siege of Vervunhive, Larkin was one of thirty Tanith selected personally by Gaunt to take part in Operation Heironymo, the mission to infiltrate The Spike and assassinate Heritor Asphodel.[3b]

Of all the talented marksmen in the Ghosts, Larkin was the only one to maintain his reputation against the scratch-company markswomen who joined the regiment following the Siege of Vervunhive such as Nessa Bourah, Jessi Banda and Sehra Muril. However, he soon developed a deeply negative relationship with another new Verghastite trooper, Lijah Cuu, whose psychotic behavior disturbed Larkin[4][5a] even before Cuu murdered Larkin's best friend Bragg in the aftermath of Operation Larisel[5b], in which Larkin took part.[5a]

By the time the Tanith joined the campaign on Aexe Cardinal Larkin and Cuu had become mortal enemies, with Cuu making two attempts on Larkin's life - once in an abandoned section of trench before being interrupted by enemy shelling, and a brutal second attack in an abandoned manor house in the Montorq Forest, where Cuu beat Larkin over the head with a skillet before being kicked in the testicles by Sehra Muril.[6a][6b] Larkin later confided in Muril his suspicion that Cuu had murdered Bragg and Muril convinced him that murdering Cuu in revenge was not the solution, but this turned out to be a mistake, as Cuu later murdered Muril under the cover of a Blood Pact assault on the manor.[6c] Larkin eventually got his revenge on Herodor when Cuu was possessed by enemy psykers and used as a puppet to try and killed the Beati, but while Larkin killed Cuu with a headshot he was too late to stop the traitor from mowing down Colonel Corbec, another of Larkin's oldest friends.[7a]

After the events on Herodor, Larkin was chosen for the EZ-level mission to Gereon. Gaunt was concerned about how Larkin would cope with the intense mental pressure of operating on an enemy-held planet, but Larkin's sniper skills made him too valuable not to include, and surprisingly coping with the situation on Gereon seemed to strengthen Larkin's mental health, to the point that he no longer suffered anxiety, migraines or delusions after returning to the regiment. However, Larkin's physical health was impacted upon the regiment's return to Gereon, when a Chaos tank drove over and crushed his left foot. Gaunt amputated the foot with his power sword, and Larkin was later fitted with a simple replacement which gave him a limp but did not affect his marksmanship.[8][9a]

Like the rest of the Ghosts, Larkin was haunted by visions of lost comrades during the final stages of the assault on Hinzerhaus during the Jago campaign, but visions of Bragg and Corbec proved encouraging and even Cuu's menacing presence only served to sharpen Larkin's focus and determination.[10a] Larkin would survive the desperate defence and went on to enjoy a year's regimental sabbatical on Balhaut, where he saved Gaunt by assassinating the leader of a Blood Pact strike team sent to kill an enemy defector Gaunt was protecting.[10a] Later, during the mission to Salvation's Reach, Larkin took it upon himself to help his old comrade Rhen Merrt recover his lost marksmanship skill, and acted as sniper for one of the minesweeping teams which infiltrated the enemy research station.[12a][12b] He then fought in the battle for Urdesh, which ended with the death of Anakwanar Sek and a massive Imperial victory.[13]

Larkin was a wiry, pale and generally unhealthy-looking man during his time in the Guard, which he joined in his late forties or early fifties. He wore three silver hoop earrings in his left ear and had a blue spiral wyrm tattoo on his right cheek.[1a] After the fracas on the ship en route to Menazoid Epsilon, he retained the bolt-action rifle he had taken from the Jantines' trophy hall as a "lucky charm," since he had used it to fell Inquisitor Heldane.[1h]

He is described by his friend Colm as having a marksman's eye and a brave heart but tempered with an unstable character. 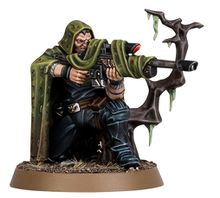