Honour to the Dead (Audio Drama)

Honour to the Dead is an audio drama in the Horus Heresy series by Gav Thorpe. It was released online in May 2013.

As Calth burns, the Battle Titans of the Fire Masters legion take to the streets of the city of Ithraca, ready to massacre the fleeing civilian population in the name of their new, dark masters. But the remaining loyalist engines of the Legio Praesagius — the True Messengers - still stand ready to defend the Imperium, even in the face of almost certain death. With the nearby Ultramarines forces scattered and lost, the people of Ithraca must fend for themselves as gigantic war machines unleash apocalyptic weaponry across the ravaged skyline... 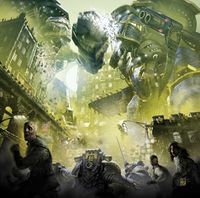