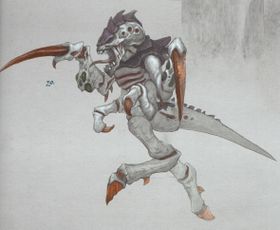 Hormagaunts (subspecies name: Gaunti gladius [2]) are fearsome but expendable Tyranid creatures used in their billions which often precede a main Tyranid attack. They are a subspecies of Tyranid Gaunt armed with razor-sharp Scything Talons and move on powerful hind legs in a series of exceptionally fast, bounding leaps that appears as a skittering, insect-like gait.[1]

Before the full attack of a Tyranid Hive Fleet, Hormagaunts are often dropped in Mycetic Spores in such large numbers that even if many are destroyed by orbital defences those that make planetfall will pose a serious problem to any inhabitants.[1]

Hormagaunts have a deadly instinctual ability to hunt that needs little direction from the Tyranid Hive Mind. They are so single-minded in hunting that they will ignore personal injury and tiredness until they have run down their quarry. Hormagaunts will then feed upon their prey, ripping pieces of flesh apart with razor sharp teeth. However their extremely fast metabolism will always drive them to constantly seek out new victims. They are usually left to their own devices once a Tyranid attack is underway, though occasionally the Hive Mind will intervene and direct them towards a more distant and more important target.[1]

Hormagaunts, unlike other Tyranid creatures, have the ability to lay hundreds of eggs in the ground and so reproduce independently of a Hive Fleet. Each Hormagaunt has a short lifespan but once one generation has died a fresh wave will have hatched and grown to maturity, ready to carry on ravaging a world where the previous generation left off.[1]

There is pronounced adaptation within the Hormagaunt subspecies. Known variations include:[Needs Citation]