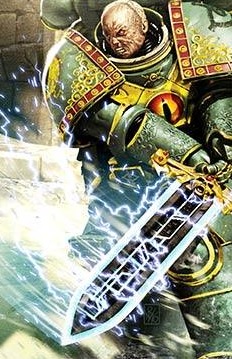 Horus Aximand after his injures on Dwell

Horus Aximand was a Captain of the Luna Wolves Space Marine Legion, and one of four members of the elite Mournival council. His likeness to Warmaster Horus was so striking that his peers affectionately referred to him as "Little Horus."Despite Aximand's allegiances to the Warmaster, he is always described as a wise and rational Astartes. He had subordinated his personality to allow him to follow Horus's banner into betrayal and civil war.[7]

By the end of the Great Crusade Horus Aximand was one of the most prestigious Captains of the Sons of Horus Legion, commanding the 5th Company. He served in the Mournival alongside his close comrades Ezekyle Abaddon, Tarik Torgaddon, and Garviel Loken.[1a] During the Great Crusade Horus Aximand took part in the Battle of Sixty-Three Nineteen[1b] and the War on Murder.[1c]

On the advice of Erebus[2], Aximand became heavily involved in warrior lodges that led to the corruption of the Sons of Horus. When Horus was mortally wounded on Davin's moon, Aximand was one of the lodge members that agreed to allow the Serpent Lodge to treat Horus's wound[2]. Aximand reluctantly followed his Warmaster into treachery but unlike Abaddon wanted to "save" as many as his Battle-Brothers as possible. He expressed extreme emotional difficulty in fighting Loken and Torgaddon during the Battle of Isstvan III. Torgaddon died during the fighting on Isstvan III, and Loken was haunted by apparitions of his comrade.[3]

Horus Aximand was seen at the drop site massacre on Isstvan V, fighting alongside the Sons of Horus, accompanying Abaddon. It was clear that a change had overcome Aximand: his movements were mechanical and his features devoid of emotion[4]. Aximand's reluctance to kill his Mournival brothers on Isstvan III could be seen as the catalyst for the change. After the massacre, Aximand started dreaming, an unusual occurrence among Astartes. His dreams replicated the day's events, but he would be aware of a new, lurking figure that always remained just out of sight. Aximand approached Abaddon about filling the two vacant Mournival positions, settling on Falkus Kibre and Grael Noctua, despite Aximand's unspoken concern that Kibre would side with his senior officer[5].

Aximand placed Grael Noctua in his command staff to evaluate him for Mournival membership as the Sons of Horus attacked Dwell. Aximand's forces easily defeat the human defenders until the appearance of loyalist Astartes led by Shadrak Meduson, Iron Hands Tenth Captain. Aximand slew Meduson's second in command, Bion Henricos, and then fought against a surprise attack by the White Scars of Hibou Khan. Just as reinforcements arrived, Aximand lost the front of his helmet and his face to a White Scars blade. While unconscious in the medicae undergoing facial reattachment, Aximand finally saw the lurking figure: Garviel Loken. Aximand was relieved; Loken was dead and posed no threat to him[5].

Later, Aximand led Sons of Horus forces in the Battle of Dwell, where he was again wounded in an assassination attempt on his Primarch by Shadrak Meduson. Aximand was next reunited with his former friend Loken aboard the Vengeful Spirit in the aftermath of the Battle of Molech. Aximand fought against Loken to try and stop the Knights-Errant from assassinating Horus. Aximand and his troops were successful in stopping the attempt, and afterwards the doubts he had harbored since Isstvan were erased.[6]

Following the wounding of Horus at the Battle of Trisolian and the Warmaster's coma-like state following Beta-Garmon, Horus Aximand wrestled for power within the Legion from Maloghurst as First Captain Abaddon was elsewhere fighting the Wolves. Aximand showed himself to be stubborn, distrustful, and aggressive, refusing to allow Maloghurst and the Word Bearers to attempt to heal Horus. When Maloghurst tried anyway, Aximand had him imprisoned and instead waged a futile battle at Heta-Gladius. Thanks to Maloghursts efforts, Horus was restored and an overjoyed Aximand, crying tears of blood, kneeled before him.[8] Aximand subsequently oversaw the capture of Pluto as Horus' armada stormed the Sol System in the Solar War. During the fighting, he boarded Sigismund's command ship Lachrymae and engaged in a duel with the Imperial Fists First Captain. During the fighting, Aximand slew Boreas and wounded Sigismund, but lost his hand to the First Captain as he teleported away.[9] During the Siege of Terra Aximand reappeared during a Mournival conference, criticizing Abaddon for his percieved dissatisfaction with Horus. When Mortarion arrived aboard the Vengeful Spirit, Horus Aximand fell into convulsions from the Daemon Primarch's stench.[10]

Following the fall of the Lion's Gate Spaceport in the Siege, Aximand deployed to the surface of Terra along with the rest of the Mournival. He had begun to once again experience the hallucinations and nightmares of Loken.[11a] He took part in Abaddon's subterranean assault underneath the Saturnine Gate in hopes of quickly winning the war. However the weakness under the gate was a trap set by Dorn, and upon burrowing under Saturnine in assault drills the Sons of Horus were ambushed by Kill-Teams led by Garviel Loken and Nathaniel Garro. During the fight, Aximand's squad was massacred and he fled into the interior of the Saturnine Quarter, coming across Arkhan Land as he was at work filling the breach in the walls. He demanded Land show him a way into the interior of the Palace so he could do as much damage as possible before he was inevitably slain. However Land was saved by Loken, who once again confronted his former brother. Aximand thought Loken was a hallucination until he was physically attacked. Panicking, Aximand was eviscerated upon Loken's Chainsword. As he died, the incessant slow breathing that he had heard in his mind since Isstvan finally ceased.[11b]