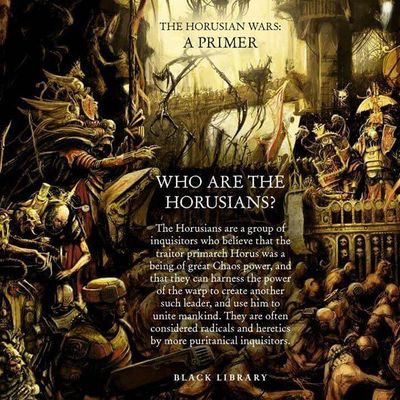 The Horusians are a radical faction within the Inquisition, related to the Thorian and Xanthite[2] factions, who believe that the power of Chaos that manifested in Warmaster Horus might be harnessed for the creation of a Divine Avatar.

The Horusians share much with the puritan Thorian faction's core ideology of the resurrection of the Emperor, which in fact dates back to the very end of the Horus Heresy, long before the Thorians' namesake Sebastian Thor lived. Two of the original founders of the Inquisition, Promeus and Moriana, looked into means by which the ruler of mankind might be resurrected. However after Moriana began to look to Dark Powers in her quest, Promeus and his followers banished the Inquisitor to the Eye of Terror. The disciples of Promeus, the Promeans, began a quest over many centuries to restore the Emperor to a mortal body.[1a] 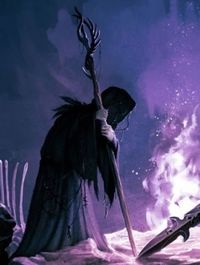 Moriana, founder of the Horusians.[5]

Eventually, a splinter faction of the Promeans, the Horusians, began to form. These disciples were continuing the work of Moriana, collecting texts on the nature of Horus and his possession by Chaos. These tomes, considered heretical, brought Promeans and the Horusians into conflict. In the end however the Horusians prevailed, and few true Promeans remained by M34. Eventually, Stalia von Dressen was able to organize anti-Horusian cells across the Imperium. Eventually her crusade led her to research the nature of the Emperor's resurrection and the founding of the Inquisition for two decades on Terra, leading her to believe that resurrection was a hopeless cause. This led her to lead an anti-resurrectionist purge within the Inquisition. By M35 resurrectionism was once again all but eliminated from the Inquisition's goals.[1a] Inquisitorial Representative Vult commissioned Hesh, a Black Priest of the Order of Abhorrence to confirm the extinction of the Horusians who concluded that the philosophy had been eradicated.[4b]

Despite this, Horusian ideals remain present to a varying extent within the Inquisition.[1a]

The ideal that is espoused by the Horusians is that the power of Chaos that manifested in Horus might be harnessed for the creation of a Divine Avatar, or perhaps can serve in the process of transferring the Emperor's soul from the Golden Throne into the body of a living god. Some Horusians believe that Horus might have succeeded controlling the Warp had he not been stopped by his brother Primarchs.[3] This form of thinking is unpalatable to many Inquisitors and has led to the Horusians being considered radicals by everyone except themselves. Though few in number, they are noted for being fanatical in their course. The ranks of the Horusians typically consist of older Inquisitors who are frustrated by the lack of answers provided by the other resurrectionist theories.[1b]

Horusian efforts to create a Divine Avatar take many forms. Some have experimented with the methods used to create Adeptus Astartes to create a body into which to draw the power of Chaos. Some try to exorcise exalted daemons from those they have already possessed believing that once banished the powers of Chaos could no longer hold control over the soul. Catullus Ven worked to find Living Saints of the Imperium, believing he could merge these individuals with Chaos to create a fusion of light and dark.[4c]

Many Inquisitors view the Horusians with suspicion as there exists a great deal of fear that they are dabbling with the power of the Warp which endangers all around them as well as the Imperium itself. Despite these concerns, most experienced Horusians are well-versed in the perils of the Warp and Chaos, which makes them the most proficient as well as dedicated of Daemon Hunters in the Inquisition. Similar to most philosophies, the members of the Horusians tread a path along the precipice of dedicated service to the Imperium as well as the fulfillment of their research. Most have walked down this path wisely, though not all Horusians have remained faithful - some, like Moriana ten thousand years ago, have succumbed to the temptation of the Dark Powers.[1b]

Some that believe that the Xanthite founder, Inquisitor Lord Zaranchek Xanthus, had pro-Horusian leanings, though this was not proven.[1c] Regardless, his writings are considered related to the Horusians.[4a]