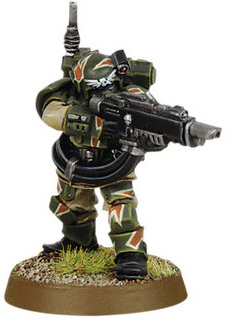 A Kasrkin armed with a Hellgun.

The Hot-Shot Lasgun[1][5][6][8] or Hellgun[1][5][6] is an enhanced version of the standard Lasgun used by the Imperial Guard[1] and the Skitarii of the Adeptus Mechanicus.[2] It is commonly issued to Imperial special forces units such as Storm Troopers for its superior armor-penetrating capabilities.[3]

Known as either a Hellgun or Hot-shot Lasgun, these high-energy weapons are more potent and destructive than common Lasguns, drawing on external energy sources for a more penetrative shot, but also more complex, requiring reinforced barrels, thermal-cooling cells and gyro-stabilized power packs. [1] A substantial backpack power source allows the weapon to be fired in both semi-automatic and rapid-fire modes. While the backpack power source is not quite as powerful as the Hotshot Laser Power Pack used in Long-Las sniper rifles it does produce an intense shot which, while still comparable to one from a normal lasgun, has far superior penetrative power.[3] However only a few Forge Worlds produce hellweapons, and the Departmento Munitorum rarely issues such weapons outside of Storm Trooper companies due to the cost and difficulty in manufacturing and maintaing them. Those issued these weapons train extensively in their repair and maintenance, up to rebuilding them completely if necessary.[1][6][7]

Associated with the fortress world of Cadia, this pattern of hellgun has been adopted by Storm Trooper companies from as far away as the Calixis Sector. These weapons are powerful enough to cut through power armour and feature a built-in targeter with space for an additional sight. They can be connected to small 10 kg backpack units designed to fit under standard field packs or the larger 15 kg backpack power packs which provide additional shots.[9]

This is the standard Hellgun issued to Grenadiers of the Death Korps of Krieg. The weapon operates in the 28 megathule range and is powered by a backpack power-source, which can supply up to two hundred shots depending on power setting and the weapon's condition. It draws energy from the pack through power cables which connect to the weapon's rapid discharge generator, where energy for each shot is stored. Capable of automatic fire the weapon's barrel incorporates a bulky cooling shroud, with coils of heat-exchanging pipes through which pressurized refrigerant chemicals are pumped, which makes it freezing to the touch between firings (a foregrip is included to protect the user). The type XIV also includes an advanced optic with x4 magnification and a low-light infra-scope for detecting a target's heat signature in darkness and through certain barriers.[5]

Despite these features the weapon has a reputation for unreliability and requires a lot of maintenance to keep functional. Massive stress is placed on the recharge generator due to the amount of power passing through it during automatic fire, leading to a drop in rate of fire if it is not properly maintained, and the power couplings can become quickly worn causing variations in shot power. Despite the refrigeration unit excess heat created by the type XIV's overpowered shots, especially when firing in automatic, places addition stress on the barrel. This can cause warping and a loss in accuracy after repeated uses, though an automatic cut-off switch will kick in to prevent firing until the weapon returns to normal temperatures. The overpowered shots also create a large muzzle flash which reveals the firer's position, and the delicate calibrations needed to keep the sight functional leads to many Guardsmen simply disabling it.[5]

Despite not being well-liked by the soldiers issued these weapons, regulations require that Grenadiers carry these weapons. Whatever issues it may have, the superior firepower of the type XIV compared to regular lasguns more than compensate for its faults.[5]

Used by Skitarii forces. As well as delivering a larger charge, the blasts are more focused and capable of punching through light armor with ease. Powered directly by the armor of Skitarii warriors, though each pack only gets twelve shots before it is depleted.[11]