A flame-hooded skull in a noose, with crossed torches: the symbol of House Cawdor 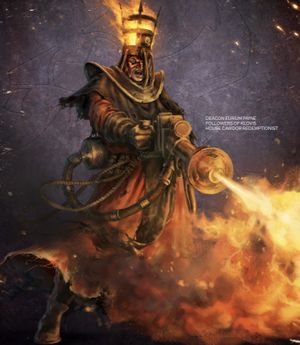 House Cawdor (also called the House of Redemption or House of Faith) is one of six Hive City Houses in Necromunda's Hive Primus, known for its rigid adherence to the Cult of the Redemption, though the connection to the Cult's outlawed crusades is one their leaders are careful to minimise. This mysterious House is perhaps the second most populous after House Orlock[1a][2a][2b][3a] while other sources state it is the most populous by far.[15e]

Originally, House Cawdor consisted of nothing more than criminals and beggars infesting the lowest spires of Necromunda. This changed at the end of M39 when the Redemption Cult was born on the blighted world. It is said that Encorderius Brayne was the founding father of the Redemption. This simple but pious factory worker despaired at the suffering of those around him and the greed of the noble houses, delivering fiery sermons against the ruling class. He also espoused that the workers had also lost their way from the light of the Emperor. His legend continues to state that one day he was saved from a deadly industrial accident by the Emperor's light and when he emerged declared he had been chosen to lead the people of Necromunda to salvation. He overcame countless trials, leading his people down into the Underhive where the first Redemption Cults formed. Many variations of this legend exists, such as Brayne being a gang leaker who took a round to the head and "found" religion or that the founding Priest was simply a conman looking to fund his gambling habit.[15c]

Whatever the truth, over the ensuing centuries Brayne's cult slowly grew within the Underhive. Their wealth became built on the refuse of Necromunda and their bitter war against House Orlock over the differences between "mining" and "scavenging" exposed the clan's weakness. The Noble Houses granted them few contracts while the Merchant Guild considered them beneath notice. In this atmosphere Redemption Cults were raised and destroyed, until M40 when Aornath VI, the First Noble at the time, used them to exert his control over the House. His plan worked and for several decades he rode high on the power of the spreading Redemptionist Cults, but in the end, he was undone by the very teachings he had embraced, his own people accepting that their salvation lay with sacrifice to the God-Emperor as opposed to the Masters of the Hive. His role became usurped by pious beggars and nobles far savvier in the ways of faith than he. Workers rose up to become Word-Keepers while the shadow of House Ko'iron consumed the upper echelons of the clan. Halfway through the Millennium, faith had completely consumed the old ways of Cawdor.[15c]

Dozens of Clan Thanes have lived and died since the rise of the Redemption Cults. Some such as Aornath's successor Gaebral the Willful or Aornath XV believed the religious rhetoric of the first Thane and were spiritual fanatics themselves. They sent servants to spread the faith throughout Necromunda and established the first foundations of the Palace of Bones upon the ancient Cawdor furnaces at the heart of the Hive. Relics across the world were gathered and Redemptionists spread rapidly throughout the city. By M41 the Thanes and their advisors became cannier in their control of the House, issuing the Holy Book of Bryane to effectively change the structure of the house to ensure better control, such as those laid out in the Ten Words of Faith. Meanwhile the Six Hundred Torments of Bryane accounted the trials endured by the Redemption founder. Redemptor Priests have long used this tome as the basis for their tortures against heretics and enemies. Many other Noble Houses reacted aggressively to the rise and spread of Cawdor, seeing its faith as a threat to their power. During the time of Thane Spriggan in M41, the other Houses first sanctioned the clan, and then convinced the Lord Helmawr to declare the Redemptionists a subversive cult. Full-scale rebellion was only avoided when Spriggan commissioned the Pax Redemptos, which stated that no Redemptionist would ever wage war in the name of their faith but rather in the name of their House. By the time of Lord Mormaer the Clan had developed its heavily dogmatic traditions, stipulating everything from the way to properly eat food to how to get out of bed. Lord Maemar now rules over a religious empire that stretches across the world and even beyond, for the Redemptionists have spread to other worlds.[15c]

House Cawdor has dedicated itself entirely to the Redemptionist cause and the Cult has attained the status of an official religion in Cawdor uniquely among the hive's Houses, making Cawdor the stronghold of the Cult and effectively controlled by it. The unforgiving creed of the Cult demands a strict code of conduct; those who break the rules are driven away and become outlaws. The codes of their religion forbid them from showing their faces in public upon pain of death, and so the Cawdor can be recognised by the hooded jackets or heavy, elaborate masks which they wear to conceal their features, which are often quite bizarre or disturbing in design. The path of righteousness is at its purest in House Cawdor, with regular public witch hunts and mass burnings of heretics and mutants, who they are especially quick to turn on, even in the more tolerant Underhive.[1a][1b][2a][2b][4][5]

While House Cawdor never has a shortage of manpower due to the popularity of Redemptionists within the downtrodden hive scum of Necromunda it is said that so-called Child-Harvesters exist to roam the hab levels at night and look for lost youth to conscript.[15e]

The legend of Pilgrim's Spire is often told in House Cawdor. The dome, situated above Fall Sands, is said to have once constituted the highest pinnacle of Hive Primus in an age long gone, when a rather more devout House than Helmawr ruled, and earned the nickname Pilgrim's Spire as the most revered place of worship in the hive. The Cawdor struggle daily to recreate this vision of the hive topped by an unshakable bastion of faith.[3b]

Cawdor's attitudes to the other Houses are strongly coloured by their beliefs, seeing others who do not follow the Redemption as worthless, soulless infidels to be re-educated violently or systematically purged, and Cawdor brethren see even Redemptionists from other Houses as little better than sinners. Active Cawdor support of outlawed Redemptionists in other Houses is often supposed, and the relationship between House Cawdor and the others is strained. They are, however, on at least stable terms with House Orlock, with whom their territory borders.[1a][2a][6]

The fiery zealots of House Cawdor are implacable righteous fighters, totally unforgiving, and prefer weapons which allow them to get close enough to their enemy to enjoy taking them down. Their heavy hoods and cowls give them the very grim look of faceless warriors with no understanding of mercy or forgiveness, and they expect none in return. [2a][2b][7][8]

House Cawdor practises segregation of the sexes at almost every level, with very little contact between them except under strictly-ritualized circumstances. While neither sex is held as superior to the other, the majority of crusaders and gang fighters tend to be male while females are often taught to be dutiful wives not to question their lot in life. Such women who wish to rise further have limited edtions such as disguising themselves, defecting to another clan, or forming their own gang of like-minded followers. Surprisingly, these female Redemptionist gangs are common and often styled after the Sisters of Silence.[15d]

House Cawdor's territory is most vast within the Great Wastes, Underhive, and garbage midden heaps and spoils of Necromunda. Here, gang workers oversee their primary industry: collecting rubbish and searching for lost wealth or relics. Extreme poverty is endemic in the house, which operates its own internal-economy of relic and bit-trading that often puzzles outsiders. Besides this, the House also oversees a variety of "dirty jobs" such as dangerous machine repair, gunk tank emptying, or even live bait to capture the creatures of the badzones.[15e]

The primary stronghold of the House is the Palace of Bones in Hive Primus, a massive fortress styled as a cathedral which holds the Chamber of the Thane. The House also has substantial holdings in Hive Temenos, which is home to a convent of the Order of the Bloody Rose.[15e] 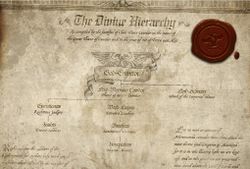 While many view House Cawdor as a single unified whole, in truth it is home to many sub-cults and splinter factions that are often at odds with one another. Most are divided into broad categories of Zealots, Doomed, and Redeemers. Zealots are the numerous frenzied faithful and are divided into many cults. Doomed such as the Forsaken believe everything mankind has been told is a lie while the Scions of the Void cut out their tongues to learn the despair of silence. Redeemers are inspired by an enduring hatred of all of mankind's enemies. They include Cults such as the off-world firebrands of the Red Redemption, the followers of Klovis the Redeemer, and Glorium Excrucium who excel at the art of torture. These sub-faiths are further divided into many gangs, many of which are a faith unto themselves.[15c]

Nonetheless, a central hierarchy does exist. At the top of the Palace of Bones in Hive Primus sits the fabulously wealthy Priest-Thane Mormaer Cawdor. While always surrounded by a retinue of bodyguards and executioners, he is nonetheless confident at the security of his position and allows the priests below him to squabble amongst themselves. Below the Thane are the religious order of Word-Keepers, many of which carry sacred religious items as a testament to their power and influence. Next are Firebrands, the favored champions of each Word-Keeper who serve as his enforcers, faithful servants, and trainers of the common gang fighters. These in turn command Brothers of Faith, who are the vastly numerous common gangers of the House. The lowest class of Cawdor are the Bonepickers (also known as Midden-Thieves) who toil over the vast rubbish heaps of Necromunda looking for lost wealth and relics. House Cawdor's vast social strata means that they have a near-limitless supply of manpower drawn from the overpopulated hive cities.[15d]