Two snakes entwined around a dagger: the symbol of House Delaque 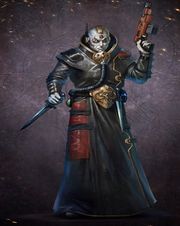 House Delaque is one of the Clan Houses of Hive Primus on Necromunda.

House Delaque benefits from a special understanding with House Helmawr, providing not just materials but also information to the rulers of Necromunda. Delaque spies are said to operate throughout the hive, observing the activities of the other Houses. It is rumoured that some of the ruling family members of the Houses, and even some Noble Houses are in the pay of the Delaque.[1] The history and hierarchy of House Delaque are all muddled in secrecy, with few knowing the truth.[4a]

The other Houses of Necromunda are understandably distrustful of the Delaques. Their look merely upholds the Delaque's long-standing reputation for swindling and espionage. Delaque gang members usually wear elongated jackets with deep interior pouches to conceal weapons and other such items. The bulk are very pale-skinned and bald-headed, with thin, soft, eerie voices. Most wear dark visors or other such devices to shelter their sensitive eyes. An intolerance of bright lights is known to be a common weakness of Delaques. Despite the entire hive being rather dim by usual standards, House Delaques territory is known to be particularly dim and shadowy.[2] More perplexing is the House's territory, which is confusing and nearly invisible. Few know of the key locations of House Delaque within the Hive.[4a]

There are many theories as to the true nature of House Delaque, with some even speculating they are failed genetic experiments or a breed of Xenos. However what is true is that all of its gang members hold an instinctive bond with one another to the point of communicating silently and over great distances with their own kind. Dubbed the Psychoterica, the origins of this gestalt mind are a mystery. Another truth is that the House is run by an elite inner nobility known as the Silent Ones, though as to their true nature none can say.[4a]

The House's primary businesses revolve around espionage, information, and assassination. While individual Delaque members do not personally work in factories or scrap mines, they do hold many such contracts and control large numbers of workers who do. Many individuals of Necromunda work for House Delaque and do not even know it.[4a]

The origins of House Delaque are muddled in rumor and hearsay. Some tales speculate they are xenos wearing human skin, while others argue they are the result of genetic experimentation. Perhaps strangest of all is the tale of the Drowned Empire, which claims they came to Necromunda in ages past when the world still possessed oceans. Living amongst the seas and aquatic gods for many years, these "fishy" men eventually found that the oceans were beginning to dry up. Being cleverer than most, Delaque built a new sea for themselves and their gods close to the center of the world.[4b] Another story goes on to say that hundreds of years ago there was a great plague across Necromunda that infected peoples dreams. The afflicted came from all houses and standing of Necromunda society, and they all gathered in the Underhive for some unknown reason. These people became the first Delaque, and the dreams that made them sick were sent across time and space by the first dwellers of the ocean. Of course, this is but one explanation for their origins, and there are many others – such as the story of the Lost Colony, which has them as the mutant offspring of the first Necromundans; the Children of Helmawr, which claims they are the true inheritors of the Imperial House usurped millennia ago; or the Immortal Assassins, which has them as psychic automata created by the Immortal Cult of Necromunda to bring about the psychic awakening of Mankind.[4b]

Whatever the truth, House Delaque was not the first House known as Shadow on Necromunda. The rulers of Necromunda have always had a need for spies and intelligence-gatherers, and have designated the House of Shadow to those who best provide this service. Little is known of the holder of the title of the House of Shadows, though it is known that House Delaque assumed the title in the aftermath of the Drypus Incident.[4b]

The first recorded instance of the Delaque occurred at some point in M36 after the rogue planter Somnus came close to Necromunda and spread a dark dream as the veil between Materium and Immaterium weakened. Many people afflicted by the dark dream soon vanished from their homes and habs. These strange occurrences took place over years, and in time the name Delaque became associated with the dreams. In time, Imperial investigators discovered the vanished had returned to the Hive and now went by the name of Delaque. These mysterious individuals began to organize themselves and slowly expand into typical gang businesses, but unlike others they had a knack for convincing people to turn to their cause. Soon enough the Delaque came into conflict against the proud House Averest in Hive Primus. However by M38 the Delaque had already infiltrated the house and turned it against itself. More and more, they were seen in apparent alliance with House Averest and it became clear Delaque was slowly taking over. Averest changed its main industry from heavy industry and trade to that of the production of Ghast, which suited Delaque better. The Delaque themselves had also begun to change, becoming paler, hairless, and favoring heavy concealing clothing. The situation came to a head in late M38 when the last free lord of Averest, Vortus Heffrujm, called in every favor to bring down the full force of the Imperial House and Adeptus Terra upon Delaque. [4b]

During the subsequent struggle, the Averest loyalists did little to dislodge Delaque's influence from the House. However it did manage to bring the last resistant members into the light, and the forces arrayed against Vortus are referred to only as the Crawling Shadow. interests. It remains unknown whether or not this name is that of an elite organisation of infiltrators, a single powerful individual, or even a means of waging clandestine war, only that when enemies sought to impede the advancement of House Delaque, it was often the Crawling Shadow they faced. History does not record Vortus’ final fate, though it does record the fall of House Averest in the wake of his disappearance. Official Imperial House records speak of a decline within the Clan House, a failing of its leaders, and worker uprisings, rampant sabotage and other calamitous events. That the newly-christened House Delaque stepped in to save their holdings says nothing of their part in acquiring them and, like everything else in its history, the story of how House Averest became House Delaque is seldom consistent.[4b]

House Delaque has held its place in Necromunda for the last three thousand years. Its members have been present at many of the great and pivotal moments over the modern history of Necromunda. House Delaque often arrives to quietly tip the scales in many of Necromunda's most bitter inter-House struggles.[Needs Citation]

To outsiders, there appears to be no structure at all to House Delaque. In truth, however, their gestalt hive mind determines hierarchy, and those members of the clan can tell how strongly connected to their consciousness and how in touch with the Silent Ones they are. Connected in this way, the Clan does not need the complex hierarchy seen in other Houses. It also, ironically, makes conflict between the Delaque more sudden and vicious, for if the Star Chamber takes exception to a member, or wishes to hunt down a Delaque for transgressions against the Clan House, then they can turn the collective force of the Psychoterica against the offender – finding their location and attacking their will.[4c]

Central to the control of House Delaque is the Star Chamber, which in truth is not even a chamber. Rather, it is a collective term for what other clans would call their nobility. The members of the chamber are not chosen because of their blood or some family name though, nor are they guaranteed a permanent place within it just because they currently have a seat at the table. Rather, membership to the Star Chamber is reliant on a Delaque’s connection to the Psychoterica and only those with the strongest bond may attend. In essence, the Star Chamber is the voice of the Silent Ones. In reality, the desires of the Silent Ones are mixed in with the desires of the powerful Delaque masters who make up the Star Chamber and, as the power of the Psychoterica has changed within the clan over the years, the two have become intermingled. Members of the Star Chamber also do not share their names with each other and so the true master of House Delaque is never known, not even to the rest of the House itself. Instead, the Star Chamber is seen within the clan as a collective voice guiding House Delaque, with none within the clan counting themselves above its control.[4c]

The central leaders of House Delaque are known as the Masters of Shadow, and it is only they who command truly knowing who they are, while to all others they are simply another Delaque. Masters of Shadow attain their power by having a strong connection to the Psychoterica. Some members of the House are born with this strong connection, while others must nurture it over many years. Psychoterica. The greatest Masters of Shadow are seen as living embodiments of the Silent Ones, their humanity almost completely consumed by the ancient alien will. Below these are Phantoms, who are known to make a Master of Shadows psychic connection even stronger. Masters of Shadow and Phantoms have a strong link and can communicate to each other silently. In battle a Phantom will often be at the forefront of an attack, directing lower gangers and utilizing the best weaponry of the Clan. It also falls to the Phantoms to preserve the Psychoterica should a ganger or Master perish. In these instances they appear at the side of the fallen fighter and cradle their head while making a psychic connection. Those who have witnessed this claim that the Phantom speaks with the voice of the Silent Ones, who take fragments of the dead and grow even stronger. Below these officers are the specialists and soldiery of House Delaque including Nacht-Ghuls, Psy-Gheists, and Ghosts.[4c]

Within House Delaque themselves, distinction is made between its pale-skinned agents, gangers, and rulers and the teeming masses of workers and hivers that work under them. These latter are known as The Lost, and it is from their ranks that new gangers and agents are recruited. What draws the Delaque to one of the Lost is a mystery, an aspect of a person’s demeanor, a legacy of their genetic history, or perhaps some resonance with the Psychoterica that the Lost is not even aware of. Some are recruited via dark promises while others are simply forcibly taken. In either case, the Lost will go through stark transformation that sees many bionic and genetic alterations and their skin become a sickly pale. Most of the Lost are newborns, remembering little of their life before being an agent of House Delaque.[4c] 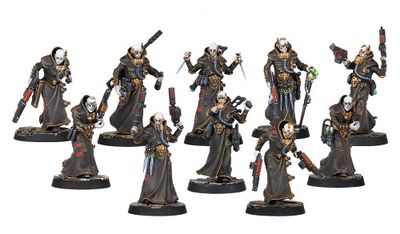