A tiger's eye and three crossed stilettos: the symbol of House Escher

House Escher, known as the House of Blades, is one of the Hive City Houses of Necromunda Hive Primus. The House is populated almost entirely by females, who are said to look down on and pity all males.[1] 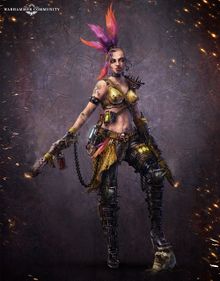 House Escher is the oldest Clan House upon Necromunda and can even trace their genetic strength back to M32, when legendary warrior women known as The Blades first made their mark upon the planet. In the intervening millennia, they have celebrated many successes and suffered many defeats.[12]

In M35, Escher was created formally at the conclusion of the Two-faced War where the House Ulanti sect known as the Eschaki exiled themselves from Necromunda's Hive Primus Spire. Wars with House Goliath raged on and off until the Great Poisoning during the Mynerva Famine, which killed thousands of Goliath warriors and saw them all but wiped out in the subsequent fighting.[12]

However, during M39, the house was infected with the Flesh Curse, and some nine out of every ten male children died before reaching their second cycle. Other clans tried to take advantage of their weakened position, and the House of Blades suffered many losses. It was left to the matriarchs of the clan to claim leadership and over the years, through means both subtle and violent, they have risen to reclaim their place among the Clan Houses.[12]

Arrogant and heartless, the Escher have a reputation for cruelty, and are perhaps the most vicious House. Their gangs may be all female, but they are as tough and heavily armed as any all male gang. They are fast and deadly, and tend to have a strong bias towards hand-to-hand combat. When choosing guns they prefer Plasma weapons for their high fire power.[5a][5b][6]

House Escher's wealth depends upon the Stimm trade, in particular the supplying of their Stimms to House Goliath and medical elixirs to House Van Saar. 90% of all stimms produced on Necromunda come from House Esher's Chymist clans.[12]

Almost all Escher are female, making them unique and perhaps the most strikingly different of the Houses of Necromunda. The few Escher males are physical derelicts; shriveled and imbecilic, perhaps due to a genetic defect in the House bloodline, or the after effects of an alchemical plague which many believe was the same as that which decimated the population of House Aranthus several centuries ago and ultimately led to its downfall.[1][2]. This physical dereliction may manifest as the males being born "simple, stupid, shameful slops of humanity." while "Most of them are stillborn born"[10b].

One notable exception to the physical derelict male population is Reiko Tori who is the twin brother of Bri Tori. The pair being the Female and Male offspring of Red Tori [10b] of House Escher; leader of the Wild Hydras gang. The twins "came from the same genesis cycle" and "... shared a womb and shared a hammock".[10b] 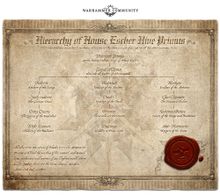 Escher society has long since developed to compensate for their imbalanced population (which is no longer seen as a disadvantage), and like all other Houses have a ruling family which, along with close relatives and families in service, dominates the institutions and political life of the House.[1]

The leader of the house is known as the Matriarch Primus – the Queen of all Escher upon Necromunda. Supporting her are the Council of Crones, made up of members from Escher’s most prominent families and powerful individuals. It’s their responsibility to enact the will of the Matriarch Primus and govern the day-to-day running of the clan.[11] Below these Matriarchs are Shivvers, Gang Queens, and the Chemist Clans.[12]

House Escher and House Goliath are old enemies, and their mutual borders are the scene of frequent skirmishes. Escher's typical disdain for all males is particularly acute when it comes to Goliaths, who they dismiss as simple and brutish, and often refer to as "Meatnecks".[1][3]

House Orlock also borders Escher territory, with the House typically considering Escher as one of its two strongest allies. The Escher leadership respect the prominent position of many fellow females in House Orlock, and the famous Orlock penchant for political marriages has led to many occasions when particularly cunning Orlock women have held the balance of power. The Escher view this with haughty satisfaction and as a result their leaders suspend their usual dismissive arrogance of men when dealing with House Orlock, but this does not stop them seeing the males of the House as disadvantaged and piteous.[2]

Escher also benefits from close ties with the noble House Ulanti. The Escher actually began as a secret sect within House Ulanti, known as the Eschaki. Following the infamous Two-faced War between Ulanti and House Athenos, the Eschaki chose a self-imposed exile from the spire as they had become disillusioned with how far Ulanti had drifted from their origins. Even as the Eschaki evolved into the Escher, they maintained their alliance with Ulanti, a deal that had served both sides well over the years.[11]

The House is known to have a long-standing contract with the Janus Clan, to provide them with vat-grown clones.[9a]

Female refugees from the spire of the Hive such as "Mad" Donna and Yolanda Catallus are often associated with House Escher, though not exclusively; indeed "Mad" Donna led a gang of Orlocks after drifting away from the Escher gang that took her in, and many also become unaligned bounty hunters.[3][4] 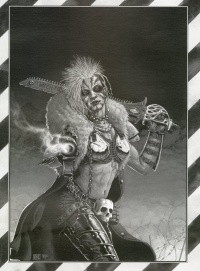