A hammer with two gears crossed around the haft: the symbol of House Goliath 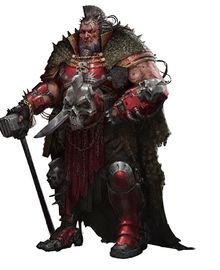 House Goliath, also known as the House of Chains[5], is one of the six houses whom make their home in the "Hive City" part of Hive Primus, the capital of Necromunda. The Goliath's domains are situated unfavourably in the Hive City, occupying the lowest and harshest areas, close to the Underhive. As a result, most Goliaths are notoriously tough and robust by necessity, and they view everybody else as soft and weak.[1]

House Goliath was originally created in early M40 by the rulers of Necromunda as a slave race meant to toil in the refineries and forges of of the world. It fell to House Van Saar and House Escher to attempt and manipulate a new strain of Humanity for this task. Meant to work in areas where standard humans could not survive, they are nearly Abhuman in their size and strength yet still mercilessly cunning and resourceful. Their Van Saar and Escher creators believed them to be docile, but in 519.M40 they launched an uprising after the death of Necromunda's ruler Alberoth Helmawr. The new ruler of Necromunda Lady Jeuns Helmawr considered a slave race to be inefficient and antiquated and thus the authorities stayed out of the Goliath revolt. In the Hundred Cycle War of Hive Primus, House Van Saar established an alliance with House Goliath and the two worked against House Escher and their allies. It would be several centuries before all Goliaths were free. Even after the Goliaths of Hive Primus established themselves as an independent power, the violence continued. By the middle centuries of the 40th Millennium the Goliaths had taken their place among the Clan Houses, even if many of their peers did not yet fully accept them[5a]

The members of the house are often seen as barbaric by everybody else in the Hive, the members of House Escher being the most vocal in this belief. Indeed, many of the Goliath's traditions, like the fighting pits and the Feast of the Fallen do very little to disprove these beliefs, giving the impression of a violent and brutal people inimical to their neighbours and rivals alike.[1]

The Goliaths have a preoccupation with physique, and their style of clothing is often designed to reveal as much of their bulging muscles as possible. This style of dress usually incorporates large amounts of metal chains and bracers. Most Goliaths also wear their hair in a mohawk.[1]

House Goliath operates and owns many of the Necromunda's great foundries and its workers are the masters of the metal and furnace. House Goliath traded the raw materials from the mines of House Orlock. The Goliath House mostly revered the physical strength. House Goliath breeds its workers like prize cattle - to create the toughest, strongest, and most unthinkingly loyal workers of the furnace in the Imperium. They are however, known for being extremely slow, relying on strength alone in battle. Due to the fact that Goliath fighters are not exactly fast on their feet, cunning opponents may attempt to use superior speed to outmaneuver them, robbing them of any combat advantage.[3]

Goliaths are unique among the peoples of Necromunda, being on the whole gene-smithed beings, forged from a stable genus of humanity but enhanced for strength and endurance. Whether or not Goliaths are, in fact, abhumans remains a subject of much debate among the representatives of the Adeptus Terra on Necromunda, though the Imperium has deemed them ‘sanctioned’ for use on the hive world under the proviso that Lord Helmawr monitors their development. To date, most Goliaths are still largely created through esoteric biological means – rapidly grown in amneo-vats from flesh-templates and turned out into the refineries and factories for immediate hard labour. These brutish creations are mostly male and mostly sterile, living for less than a decade on a diet of backbreaking work and growth stimms before their bodies fail and they die. Despite this short life-span, Goliaths are born with a baseline knowledge of their world and their position in it delivered via a cranial data-slug. Alphas ensured that the data-slug was altered to include the collected knowledge and experience of the Goliaths who had come before. In this way, the Goliaths share the knowledge of the clan gathered over hundreds of generations, giving them a working understanding of everything from hive industries to clan weaponry. [5a] Vat-birthed, a Goliath can be freakishly huge, larger than even a Space Marine, other than their lack of speed, they are also known suffer from mental imbalances and extremely short lifespans, all this has resulted in many considering them to be a classifiable strain of Abhuman.[3] 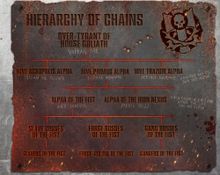 House Goliath is overseen by a supreme ruler known as an Over-Tyrant. This overlord holds dominion over the clan via the flow of life-giving stimms. Below him are brutal mostly naturally born gangers known as Alphas. The largest subfaction within House Goliath are the Vatborn. These are the workers who fill the factories of the House, maintain its position as a refining and manufacturing powerhouse on Necromunda and also provide fodder for the Goliath gangs. Second in population size to the Vatborn are the ‘Natborn,’ or natural-born Goliaths. Lastly, there are the ‘Unborn,’ or outsiders. These are by far the smallest sub-group and are made up of men and women who have been ‘enhanced’ by Goliath growth technologies to earn a place among the House. Unborn are unusual in that they have chosen to join the Goliaths, sometimes unwillingly, rather than been born to them.[5a]